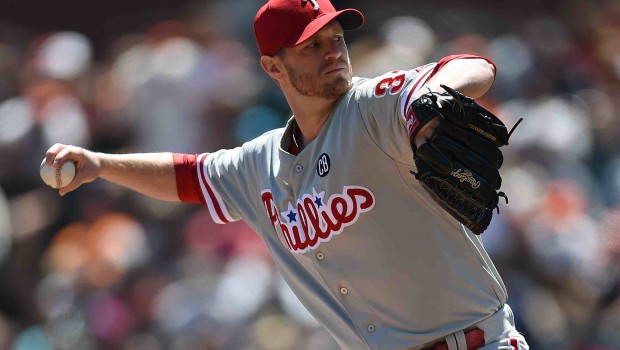 PHILS’ KENDRICK IS JUSTIFIABLY PISSED AT HIS EARLY HOOK

Even watching the Phils-Giants game on TV yesterday from San Francisco, it was very clear that Kyle Kendrick was pissed off.

He was into the sixth inning with a 5-1 lead and a head of steam.

And then his manager, Ryne Sandberg, came out to replace him.

Sandberg had just reached the mound when Kendrick dropped the ball into his hand at the beginning of an ugly inning when the Phillies blew a four-run lead on their way to a 6-5 loss.

“He was on the mound. Borderline,” Sandberg said later, when asked if it bothered him. “He was upset.”

“We were out to a great start,” Ryan Howard said. “It was just something like that, where those guys took advantage to start a rally. It was something small, a small miscommunication.”

Giants third baseman Pablo Sandoval followed Buster Posey’s leadoff single in the sixth with a popup in the infield. Howard positioned himself to make the catch with Chase Utley stationed just a few feet behind him.

“You got it,” Utley said to Howard.

The ball dropped between them. Utley then picked up the ball and flipped it toward Phillies shortstop Jimmy Rollins, but the ball never reached its target. The Giants suddenly had runners on first and second with no outs.

“Looking back, I had more time,” Utley said.

“It seemed to be a momentum swing,” Sandberg said.

It was. Michael Morse ripped a double to center field to score Posey to make it 5-2. That is when Sandberg pulled Kendrick from the game, despite the fact he had rebounded after surrendering a first-inning home run to Hunter Pence and despite the fact that Kendrick against Travis Ishikawa seemed like a favorable matchup.

Kendrick told a Phillies spokesman he did not want to speak to reporters after the game, so it is unclear if he was upset at himself, at his teammates for missing a catchable ball or his manager for pulling him from the game.

Maybe it was all of the above.

“I don’t know,” Utley said. “It’s a question you have to ask him. Kendrick is a competitor. He wants to be out there all the time. I don’t blame the guy for being frustrated coming out of the game. I expect that.”

Left-hander Mario Hollands walked pinch-hitter Adam Duvall on four pitches to load the bases. Joe Panik then hit a high chopper behind the mound. Hollands fielded the ball, but threw late to first as Sandoval scored to make it 5-3.

Right-hander Justin De Fratus replaced Hollands and got pinch-hitter Gregor Blanco to hit a ball to shallow left field, but the ball fell between Domonic Brown and Rollins to score Morse to make it 5-4. Angel Pagan followed two batters later with a sacrifice fly to right to score Duvall to tie the game.

The Giants scored the winning run in the eighth inning when Panik hit a leadoff triple against Phillies left-hander Antonio Bastardo and scored on Blanco’s single past Rollins, who broke left on the play when the ball actually went right.

“I never saw it,” Rollins said. “If the ball was hit at me, it would have hit me in the face. There was a reflection off the padding in front of the seats. If I see it, I make a diving or backhand play, but I never saw it. I heard it. That’s all I can tell you. Until I saw the replay, I had no idea where the ball was.”

Cubs right-hander Edwin Jackson is second with a 7.92 ERA.

But Kendrick settled in, and the Phillies came back against Giants right-hander Tim Hudson. The Phillies took a 2-1 lead in the third inning and scored three more runs in the fifth to take a 5-1 lead. But they also left the bases loaded in the fifth and sixth innings.

“We didn’t maximize and left some runners out there,” Sandberg said. “The combination of the two [misplays in the sixth] was a momentum swing.”