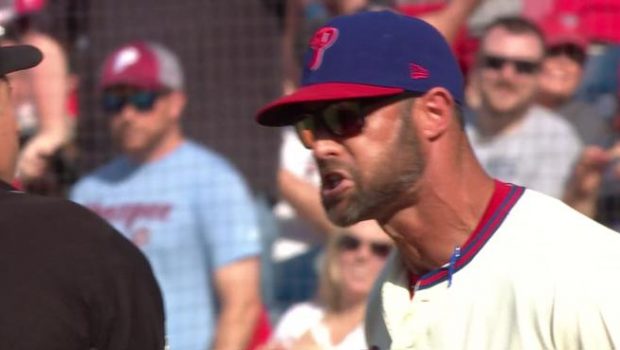 Sometimes to just have to kick some dirt to make a point.

And for Phils manager Gabe Kapler it’ll cost some bucks too.

Kapler was fined an undisclosed amount by Major League Baseball for kicking dirt at an umpire’s shoes Saturday during a game with the Miami Marlins at Citizens Bank Park.

Kapler came out in the fourth inning to argue with home-plate umpire Chris Guccione when center fielder Scott Kingery was called out on strikes. Kingery had swung and missed, but the ball hit Kingery on the hand. Guccione pointed at first-base umpire Mike Everitt, who ruled that Kingery had swung.

Kapler was tossed, kicked dirt on Guccione’s shoes and left the field to a standing ovation. It was the first ejection of his managerial career.

It didn’t take him long to get the second.

Kapler was ejected Tuesday night, tossed by crew chief Joe West in the sixth inning. West had issued a warning to both the Phillies and the New York Metsafter Kingery was hit by a pitch following back-to-back homers by the Phillies. When Kapler left the dugout to question the call, West tossed him.