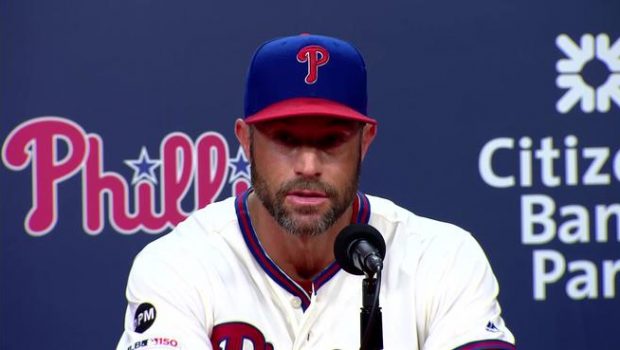 PHILS KAPLER: I WON’T BENCH PLAYERS JUST TO SAVE MY JOB!

Be careful what you’re glad for, Gabe Kapler.

Here’s what else he said today on his weekly seance with Angelo Cataldi:

“Let me start with this—it would be easy to bench players and I know that it would make a significant segment of the fan base happy. And I would not have to face questions about it every day and you know what, in the end maybe my job would be safer. It would be easy, but it wouldn’t be right. I see our fans as an important part of what we do every day, but I can’t and I won’t manage based on online polls. I’m gonna make decisions that I believe are in the best interest of our team based on what’s happening inside that clubhouse.

“It seems to assume that there’s a lack of care coming from Jean, coming from Cesar, like they’re not trying hard enough. And I understand why it might look like that from the stands, watching on TV, whatever. If that were the case, than maybe some sort of punishment would make sense, like pulling them out of the lineup, not playing. But that’s just not the case. Jean didn’t run as hard as he could because he let his frustration come out for a moment, and we’ve all had those moments. I had mine kicking dirt after a temper tantrum last week. Cesar saw a ball that was foul, that was fair, and then was overly cautious and didn’t want to take the bat out of Bryce’s hands. These aren’t the best decisions, but they’re not the product of people who don’t care and punishment might make some people feel better for a moment—like they’ve gotten some sort of vicarious, emotional release, whatever. But punishment doesn’t teach emotional control during our most challenging times. And punishment doesn’t insure that we’re gonna see foul or fair better with more accuracy. It’s a minute of emotional release for fans, and sometimes for decision makers, but not for the clubhouse who continues to see the effort that Cesar has brought for years and who has seen hustle from Jean and I don’t want to let those clubhouse guys down. The guys that we have in that room are professionals. They don’t need a big public spectacle to understand the pressure and the urgency and they don’t need a stunt like removing somebody from a lineup.

“I see everyone of our players working their asses to be the best they can be every single day. So failure happens in this game, but I trust the group in that room and I’m gonna have their backs every single day because they deserve that.”