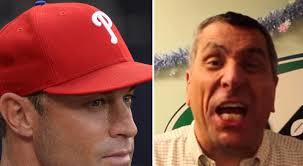 You just knew this was going to happen when Phils manager appeared with blowhard Angelo Cataldi on WIP this morning.

The convo turned into a battle of barbs when Cataldi attempted to blame Andrew McCutchen’s season-ending injury on Jean Segura, who didn’t get out of the batter’s box and failed to run out a pop up during the same play Monday against the San Diego Padres.

Kapler said it was “absolutely irresponsible” and “categorically untrue” to blame McCutchen’s injury on Segura — McCutchen got hurt because he planted his foot wrong and his knee gave out.

“Jean Segura has been one of our best players. He doesn’t deserve to be scapegoated like this,” Kapler said.

“Angelo, you don’t speak for the whole city,” Kapler said “You talk to the guys that call in, the men and women that call in.”

“And the ones that email me and the ones that are on Twitter, and all of the other people,” Cataldi shot back. “Are you trying to tell me you are more plugged into this city than I am? You’ve been on the west coast for a week, Gabe.”

Kapler responded, “I’ll tell you this, what you’re plugged into are the people that call in to your show. Not all of the fans in Philadelphia like you represent.”

Cataldi’s final question to Kapler was whether he would have done anything differently over the past wee The Phillies manager turned the inquiry around on the longtime WIP morning show host.

“I’m disappointed in some of the answers, so I guess we’re equal in that,” Cataldi said.

“Look forward to next week Angelo,” Kapler said sarcastically. “This is going to be fun.”