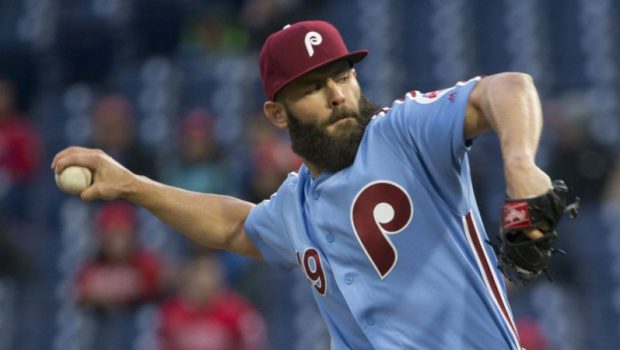 PHILS JAKE ARRIETA EVEN IMPRESSES HIMSELF IN 7-0 WIN OVER BUCS!

Now that’s the Jake Arrieta that the Phillies saw when they signed him to a lucrative free agent contract last month!

Arrieta struck out 10 and tossed one-hit ball over seven innings to lead the Phillies to a 7-0 win over the visiting Pirates.

Rhys Hoskins homered and Cesar Hernandez had a three-run single to pace the Phillies in their first game back from a 4-2 trip.

This was Arrieta’s (2-0) best outing since he left the Chicago Cubs for a $75 million, three-year contract. He had his 14th career double-digit strikeout game and walked two, combining with two relievers on a two-hitter.

“It was about as good as I’ve been,” Arrieta said.

Arrieta, with two no-hitters and a World Series championship with the Cubs, struck out seven through the first four innings — he had struck out only six over 10 2/3 innings in his first two starts. He wore short sleeves on a night when temperatures dipped into the 30s, and the postseason flags whipping in the wind were about the only objects with more movement than Arrieta’s fastball .

“Nights like tonight where I do have pretty much command at will, it just makes my job that much easier,” Arrieta said.

The Phillies haven’t had a winning season since 2011, when they won their fifth straight NL East title. The addition of Arrieta signaled a long, arduous rebuilding process could turn into contention this season. They’ve already had a six-game winning streak — the last three on a sweep at Tampa Bay.

The 32-year-old right-hander was on from the start, striking out Adam Frazier and Gregory Polanco to open the game on a pair of 94 mph sinkers. He allowed only an infield single in the second inning.

“You’re going to get excited about having Jake go out there every fifth day if he’s sort of the mid-range version of himself, which is still very good,” Phillies manager Gabe Kapler said. “If he’s a little bit better than his average self, he’s unhittable.”

Hoskins lined his third homer of the season to left, and Hernandez made it 4-0 on a bases-loaded single to left off Jameson Taillon (2-1).

Taillon allowed five runs and was chased after 1 1/3 innings.

Yacksel Rios and Victor Arano each tossed a scoreless inning in relief. Arano has retired 32 consecutive batters dating to 2017.