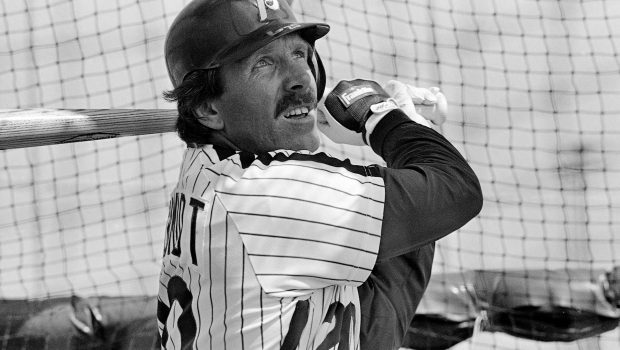 By Mike Schmidt, for the Associated Press

So baseball began holding “Frisk the Pitcher Night” at every big league stadium this week. Max Scherzer had the look of a guy who didn’t need help to do his job as umpires checked him at Citizens Bank Park.

No evidence was found. On Scherzer or anyone else.

OK, it’s understandable that Commissioner Rob Manfred was under pressure to take action over accusations that a high percentage of today’s pitchers cheat, using something in addition to sweat and saliva on the ball.

The modern-day pitcher can make a fastball sail in or away from a hitter with a cutter. They can make a changeup drop 6 inches with the split, made famous by Bruce Sutter.

They have the basic slider as well. Then they have the difference maker, the 95-100 mph fastball they throw high in the hitting zone, the four-seamer made famous by Nolan Ryan, Dwight Gooden, Billy Wagner and Scherzer, to name a few.

Four-pitch pitchers were very uncommon in the ’70s and ‘80s when I played. I can think of Don Sutton and Rick Sutcliffe, both former Dodgers, off the top of my head. The average pitcher in my day featured fastball, slider or curve, and changeup. As a hitter, I had fewer pitches to deal with.

I know first-hand that pitchers used every possible scuff, scratch, spit, pine tar and sweat, with a little dab of rosin bag, to get hitters out. It’s been in baseball forever. There were many who flaunted it, many known for it, one is a Hall of Fame member. So let’s don’t act like this is something new.

I have a simple answer: sabermetrics, analytics and other technology. While these sources of information have a place, they have had negative effect on the hitters.

This year the overall MLB batting average could become the lowest ever, now around .238. Must be because the pitchers are cheating … no!

It’s the shifting defenses coupled with hitters being lead astray by information: Hitting the ball in the air is better than on the ground, striking out is only one out, and a high velocity off the bat and perfect launch angle makes a great hitter. Imagine a Trackman on the wall in the batting cages that spits this garbage out — they have them.

Back to the main issue, pitchers being suspected and inspected. Let’s say MLB has a good case, why would anyone risk being caught now? In fact, with the movement of players around baseball, why wouldn’t a player on a contending team report a former teammate who is pitching against his team?

A game today must go through 75-90 balls. Any ball touching dirt is thrown out. Pitchers want clean baseballs. Aaron Nola once told me he grew up learning to make a clean baseball move, and his pitch movement is one of the best in baseball.

I played in a time where pitchers wanted scuffed balls and knew how to use the scuff to their advantage. Most would consider me a successful and knowledgeable hitter — it is my opinion the decline of hitting today lies directly in the hitters’ inability to hit the high fastball and the lack of accountability for striking out.

Learn to hit, or take the high fastball and make contact more often. That would narrow this gap quickly.

The charade on the field that began Monday may have been designed to scare the pitchers straight, but it seemed to me to be more of an embarrassment to baseball, as well as an excuse for poor hitting.

I spent time with one of the best pitchers in baseball this offseason and asked him about the high fastball as a strikeout weapon. He snickered as he said that’s an easy strikeout, waist high and above.

Without any sauce, I would add.