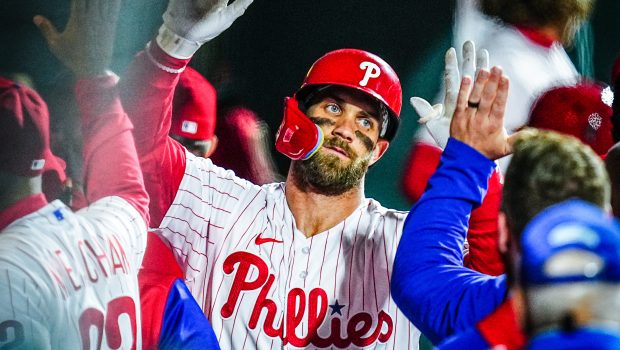 PHILS HITTERS ARE FINALLY CATCHING UP WITH OPPOSING PITCHERS!

That’s the night spring training ended for Phillies hitters and the race for the playoffs began.

And they were led by 2021 NL MVP Bryce Harper, who homered and drove in two runs.

Rhys Hoskins had three hits and the Phillies knocked off Rockies 8-2.

“All around good game, good start to the series,” Harper said. “Come tomorrow with the same mentality, same fire and passion we had tonight.”

Four of the Phils runs were unearned as the Rockies committed three errors and made several other defensive mistakes that resulted in hits.

In the third. Rockies shortstop Jose Iglesias dropped a throw from second baseman Brendan Rodgers on Harper’s grounder that would have forced out Hoskins. After starter Kyle Freeland (0-3) struck out Nick Castellanos for what should have been the third out, J.T. Realmuto doubled home Hoskins.

And the Phillies went up 3-2 when the next batter, Schwarber, hit a routine fly ball to right-center that fell between Grichuk and right fielder Charlie Blackmon. The gift double scored Harper and Realmuto.

“Both lost it for a moment in the twilight,” Black said. “The basic mistake was not initially someone calling for the ball.”

Philadelphia got more help from Colorado in the seventh when Jean Segura led off with a single and aggressively took third on Hoskins’ single, sliding in just safely when Kris Bryant’s throw from medium left field was off line.

“Those are the plays that can springboard an offense,” Gibson said.

Segura then scored on Harper’s sacrifice fly, Hoskins went to third on the play and scored on Ashton Goudeau’s wild pitch. Another fielding error by Ryan McMahon at third base, his second of the game, resulted in two runs scoring on a potential inning-ending double-play grounder.

“We’ll be back tomorrow to play hard,” Black said.