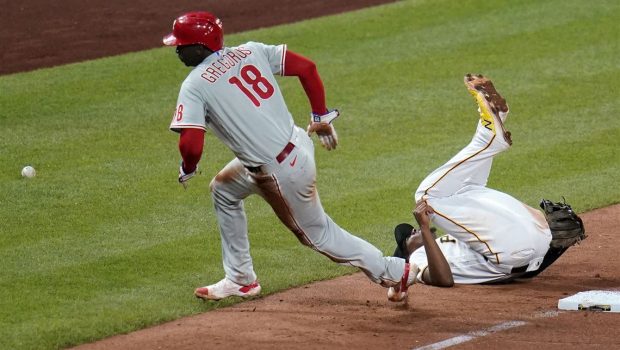 Didi Gregorious scored when Michael Chavis’ attempt to cut down Gregorious at third sailed wide and the Phillies edged the Pirates 2-1.

Rhys Hoskins led off the 10th with a sharp grounder to Chavis at first base. Rather than try to beat Hoskins to the bag for an out, Chavis tried to surprise Gregorious he ran from second to third.

For the lead! #RingTheBell pic.twitter.com/AgAzKvKJWh

The Phillies are now 54-47, and are one game ahead of the Cards for the third wild card playoff spot with 61 games to play.PHILS

Corey Knebel (3-5) earned the win by working two scoreless innings, his 14th straight scoreless appearance. Knebel began the bottom of the 10th by picking off Pirates rookie Oneil Cruz at second base, then retired the final two batters as Philadelphia matched a season high by moving seven games over .500 (54-47).

“That was all Corey,” Phillies interim manager Rob Thomson said. “He just felt (Cruz) was getting too big a lead and he was probably going to run. It was a pretty good inside move.”

J.T. Realmuto had two of Philadelphia’s six hits, including his 10th home run of the season leading off the sixth.

Pittsburgh’s Cal Mitchell tied the game in the seventh with his fourth home run, turning on a 99 mph fastball from Jose Alvardo and sending it into the right-field seats. Chavis had two singles for the Pirates, who were limited to four hits. Yerry De Los Santos took the loss (0-3).

Ranger Suárez worked six shutout innings as he neared the anniversary of his transition from reliever to starter. Suárez retired the first 11 Pirates he faced and surrendered three singles with a walk and a hit batter while striking out a season-high eight and trimming his ERA to 3.60.