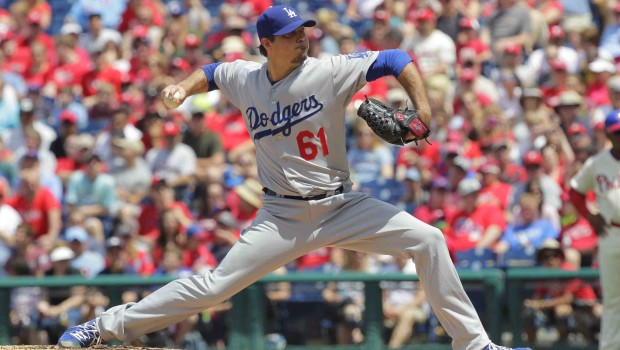 PHILS HAVE NOOOOOOOOO CHANCE AGAINST BECKETT

Dodgers starter Josh Beckett threw a no-hitter at the Phillies Sunday, walking two and striking out five in a 6-0 victory, throwing 80 of his 128 pitches for strikes. He entered the game sporting a 2.89 ERA in eight starts this season.

You might remember Beckett as the guy with the 5.23 ERA and 5-11 record in 21 starts in his final season in Boston in 2012. The Sox sent Beckett, Carl Crawford, Adrian Gonzalez and their awful salaries LA and actually got some prospects in return.

In 2012, when confronted about playing golf despite not being able to pitch because of a bad back, Beckett famously scowled and answered, “My off day is my off day.” And he was one of the poster children of the chicken-and-beer Sox whose game-day appetites in the clubhouse grew into a scandal that eventually cost two-time World Series manager Terry Francona his job.

Those days are long gone and Beckett was all business on Sunday.

Beckett looked to be in a little bit of trouble when Chase Utleystarted jogging toward first base with two outs in the ninth inning. Utley thought he had drawn the second walk of the inning, but the pitch — a curveball — was called strike two.

Beckett’s next pitch, a fastball, sailed down the middle and froze Utley for the final out, sealing baseball’s first no-hitter of the season.

“It’s special,” Beckett said. “It’s something that you certainly think about throughout your career, but very few people have been able to do it.”

“I knew when I went out there to warm up that I hadn’t given up a hit yet — I knew the whole time,” Beckett said. “I was actually just joking about it in the fourth inning.

“To be completely honest with you, I was just waiting for them to get a hit. You don’t think at this point in your career that you’re gonna do that.”

Beckett’s pitch count had climbed to 90 after six innings and 100 through seven, but the three-time All-Star and former World Series MVP knew he was going the distance.

“I went to check on him after seven, and he’s like, ‘You’re not taking me out,'” Dodgers manager Don Mattingly said. “He was talking about the no-hitter the whole time.”

About the closest the Phillies (21-26) came to getting a hit came on left fielder Domonic Brown’s hard-hit flyout to the left-center field warning track in the fifth inning.

“I thought he crushed that ball,” Beckett said. “It sounded good off the bat.”

The Phillies hadn’t been no-hit in a nine-inning game since the Cards’ Bob Forsch did it to them on April 16, 1978 at Busch Stadium. Former Dodgers Bill Singer and Hall of Famer Sandy Koufax threw no-hitters against Philadelphia in 1970 and 1964, respectively.

A.J. Burnett (3-4) suffered the loss for the Phillies after allowing six runs (four earned) and 11 hits in seven innings. He struck out three and walked one.

“Today was his day,” Burnett said of Beckett, his former teammate on the Marlins from 2001-05. “You have to tip your hat to the man. He was on. What more can you say?”

First baseman Adrian Gonzalez knocked in the Dodgers’ first run with a two-out double in the first inning. Third baseman Justin Turner led off the second inning with his second homer of the season, which sailed over a leaping Ben Revere in center field. Shortstop Erisbel Arruebarrena gave Los Angeles a three-run cushion with a two-out RBI single in the sixth.

The only Phillies to reach base were Utley in the first inning, right fielder Marlon Byrd in the second and shortstop Jimmy Rollins with two outs in the ninth — all on walks. Beckett retired 23 straight batters between the second and ninth innings.