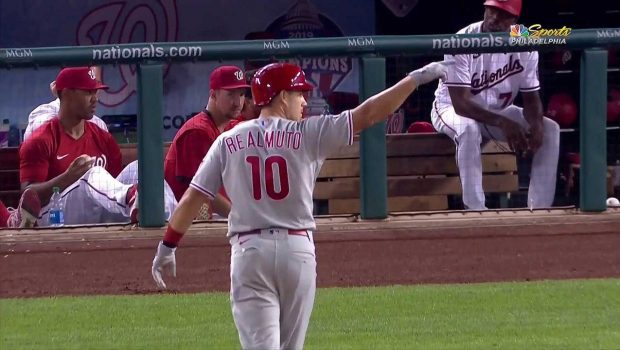 PHILS HAVE METS WEEKEND ON THEIR MIND AFTER NATS IN DC

The Phillies are hot on the Mets tail and they head to New York for a weekend series after the finish with the Nats in DC.

Anderson, 33, will start in place of Vince Velasquez, who was moved to the bullpen as part of a shakeup involving the back end of the rotation. Anderson worked in relief of Velasquez on Saturday at Pittsburgh, and he allowed two runs on three hits and two walks in four innings.

Anderson, who missed time in June while on the COVID-19 injured list, began the season in the rotation, but he went to the bullpen after going 2-4 with a 6.96 ERA in eight starts.

“You have to locate,” manager Joe Girardi said. “His curveball seems to be a little bit better to me than when he had the COVID. His changeup is a really good pitch and probably the pitch that he’ll rely on heavily.”

Espino started the season working primarily as a reliever, but as injuries began to hit the rotation, he got the work. Now with the departures of Max Scherzer and Jon Lester — along with Stephen Strasburg’s injury — the 34-year-old looks be part of the rotation for the remaining two months.

Last time out, Espino earned a win against the Chicago Cubs, allowing a run on four hits in 5 1/3 innings while striking out six on Friday. He did not learn he was making the start until late in the afternoon following the trade of Lester.

“It’s obviously a little difficult with all the missing pieces, our teammates, after the trade deadline,” Espino said, “but you’ve got to (keep) yourself positive.”

The Phillies hit four homers in a 5-4 win over the Nationals on Tuesday night. Jean Segura, J.T. Realmuto, Ronald Torreyes and Bryce Harper connected, and the struggling Philadelphia bullpen hung on despite a late Washington rally.

Harper extended his on-base streak to 12 games, during which he has 15 hits and 15 walks.

Zack Wheeler gave up four runs on eight hits in 7 1/3 innings as the Phillies moved above .500 and a game closer to the Mets, who lost again.

“We’re getting there,” Wheeler said. “These are games that we need to win. We’ve been doing that. It doesn’t really matter how you win them as long as you win them. We’re keeping track and hopefully we can continue this.”

Jose Alvarado pitched the ninth in place of Ian Kennedy, who had worked two days in a row, and he earned his fourth save.

“He’s OK,” Girardi said of Kennedy. “I made the decision not to use him.”

Josh Bell homered for the Nationals, who rallied from 4-0 and 5-2 deficits but fell short. Washington is now nine games below .500, matching its season low.

“I feel like the overall vibe in the clubhouse is: We’ve got new guys on the roster, younger guys, but everyone is hungry,” Bell said. “Everyone is excited for their chance to come up and hopefully make a name for themselves here. It’s just that next-man-up mentality, and we’re going to ride with it.”