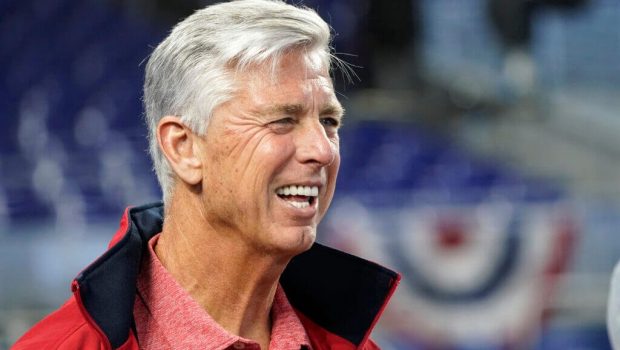 PHILS HAVE 6 DAYS TO MAKE A DEAL AND NAIL DOWN A PLAYOFF SPOT!

They need ay least one more starting pitcher and some live bats if they are going to survive in the pennant race until Bryce Harper and Jean Segura return.

He addressed those needs the other night:

“I’d love for him to come back, but I don’t know when,” Dombrowski said of pitcher Zach Eflin. “So I don’t think, from my perspective, that I can just say we’re going to wait for that to happen. I don’t think we can just sit here and wait to see what takes place.”

The Phillies landed one of the trade market’s top starters last summer, sending a prospect package centering on Spencer Howard to the Rangers for Kyle Gibson (and reliever Ian Kennedy).

This year’s market features a trio of high-profile arms who, like Gibson at the time, come with a season and a half of remaining club control: Luis Castillo, Frankie Montas and Tyler Mahle.

“Every position there’s premium guys out there, and then there’s other guys that could be helpful,” he said . “Well, the premium guys are probably going to cost you your top prospects. I don’t think, as an organization, we’re in that position right now. I just don’t think we’re there.”

The Phils had four players — right-handers Andrew Painter, Mick Abel and Griff McGarry and catcher Logan O’Hoppe — on Baseball America’s most recent Top 100 prospects update. Painter was the only member of that group to check in among the top 50.

Beyond the rotation, the Phils roster spots of Odúbel Herrera and/or Jeurys Familia could be in jeopardy if the Phils can find upgrades at those positions. Herrera, re-signed to a $1.75MM guarantee during Spring Training after the club declined a costlier team option, has hit only .240/.280/.389 through 186 plate appearances. Herrera, Matt Vierling and Mickey Moniak have all struggled again, and the Phils carried a league-worst .202/.254/.296 showing out of center field into play Monday night.

The bullpen, has been excellent of late after a disappointing start, posting a 2.69 ERA through the past 30 days. Given the Phils’ longstanding relief issues, however, Dombrowski and his staff figure to explore ways to add another arm to the mix. Familia, signed to a $6MM deal over the offseason, has continued to struggle of late and owns just a 4.83 ERA/3.81 SIERA across 31 2/3 frames on the season.

Two areas the Phillies don’t seem they’ll need to address via trade are second base and the corner outfield/designated hitter. They’ve been without Jean Segura and Bryce Harper due to respective finger fractures, but both players are progressing well in their recoveries. Segura is set to begin a rehab assignment with Triple-A Lehigh Valley tomorrow, and Todd Zolecki of MLB.com writes that the second baseman is hopeful of returning to the big league roster by the time the club kicks off a homestead August 4 against the Nationals. That’d be an ahead-of-schedule return for Segura, who was projected to miss 10-12 weeks after undergoing surgery in early June.

Harper is further behind, having suffered his injury in late June, but he tells reporters he’s hopeful of getting the pins removed from his surgically-repaired thumb next week. The reigning NL MVP reiterated that he fully expects to play again this season, and Dombrowski noted (via Lauber) that Harper’s injury “is not one of those where it’s [going to be] long enough that you go out and trade for someone that’s going to take that position.” Harper had been limited to DH duty before his thumb fracture because of a partial UCL tear in his elbow that rendered him unable to throw. He acknowledged he’ll have to go through a throwing program and expressed some hope he could get back into the outfield before the end of the year. Even if Harper were to wind up limited to bat-only duties, the Phils would happily plug Nick Castellanos and Kyle Schwarber into the corner outfield if it meant getting Harper back in the lineup for the season’s final month-plus.

Virtually every win-now executive will face some questions about the game’s highest-profile trade candidate over the next week. Yet between their glut of corner outfielders and stated reluctance to deal top-tier young talent, the Phillies would’ve made for a tough fit in the Juan Soto bidding even if the Nationals make him available to intra-division rivals. Dombrowski didn’t address Soto directly, but he more or less shot down any speculation about that possibility. Asked whether they’ll look into adding a “generational talent,” Dombrowski replied “I don’t know that we’re swimming in that market. I love star players. I always have. I have acquired a lot of them. I know [owner] John Middleton likes that. But we do have some star players. I think the problem we’ve had is the depth of talent in our organization. To strip the depth of our talent to add a generational talent, I don’t know that is where we sit at this point.“