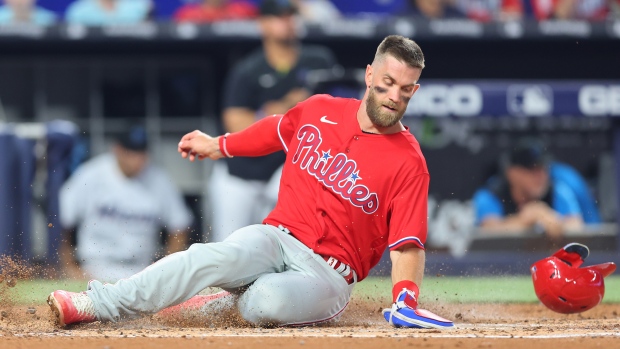 “Early next week, possibly,” Thomson said yesterday of when Harper could begin a rehab stint, according to Jim Salisbury of NBC Sports Philadelphia.

“We’re looking around that 24th date, somewhere around there.”

Harper took batting practice on the field at Citizens Bank Park Monday for the first time since he fractured his left thumb on June 25. Afterwards, president of baseball operations Dave Dombrowski mentioned the beginning of September as a possible return date to the majors for Harper.

“Well, Bryce has made great progress and today is the first day that he’s hitting on the field, so we feel really good about that,” Dombrowski told Chris Russo on MLB Network.

“He’s done very well with the recovery. Now, it’s really kind of up to him. He’s been cleared as far as participation is concerned, so he’s out there just working his way back up. So when you say Sept. 1, I think that’s a realistic goal.”