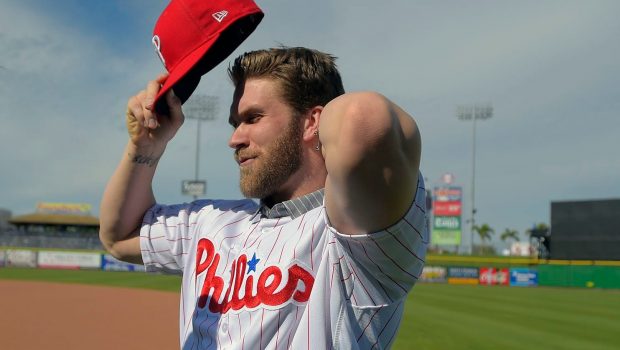 Bryce Harper sat out yesterday’s Phillies-Astros game, saying he’s “a little sore” one day after getting hit by a pitch and bruising his right ankle.

Manager Gabe Kapler says he has no concerns about Harper being ready for opening day on March 28 against the Atlanta Braves. Harper, who recently signed to a record $330 million, 13-year contract, agreed with his manager.

“As of right now, no [concerns],” Harper said. “If I felt that way, then I’d probably tell you guys. I really don’t.”

X-rays were negative, and Harper is listed as day-to-day.

“Bryce played catch today, he also did some agility work in the weight room,” Kapler said after a 13-5 loss to the Astros. “He looked good. We’re going to evaluate him in the morning and see how he’s doing. As of right now we don’t have a firm plan for tomorrow yet.”

Harper was struck by a 96-mph fastball from Toronto rookie Trent Thornton in the sixth inning of Friday’s game.

“Felt good today coming in,” Harper said. “I was a little sore. Just trying to keep the swelling out, things like that.”

When asked about dodging a major injury, Harper replied, “I wish I would have dodged the ball.”

The slugging outfielder clutched his ankle and stayed on the ground for a few moments after getting hit. Harper was checked by a trainer, limped toward the dugout with assistance and hobbled toward the clubhouse.

“The first time I really got hit on the ankle bone,” Harper said.

He’s 0-for-5 in 10 plate appearances in four exhibition games.

“It’s definitely important to get back out there and get the at-bats that I need,” Harper said. “But also being smart. I’d rather be healthy than get my at-bats.”