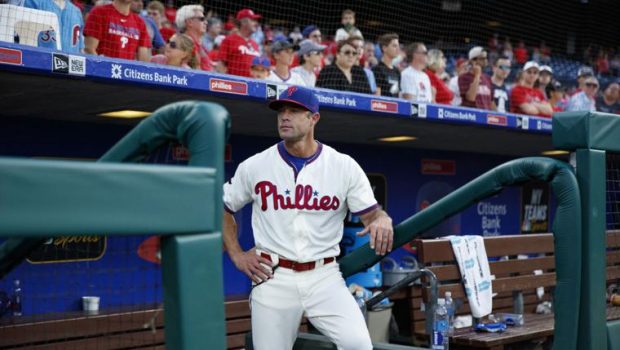 Gabe Kapler finished his second season as Phillies manager yesterday, and what is his report card?

But based on the Phillies all-in effort to spend money — more than a $50 million increase in salaries — Kapler’s future is in doubt.

“It hasn’t been his fault,” Bryce Harper said. “He’s had some tough decisions he had to make, bullpen-wise, lineup-wise; not having your leadoff guy, not having your setup guy, things like that. A lot of guys have been thrown into the fire this year from Double A and Triple A, it’s just how the season goes. It’s part of it. We’re going to build on that next year, hopefully. I love our staff. I enjoy our staff. I enjoy playing for our staff. They’ve made me better each day and I appreciate that.”

“As of now, I expect to see him back here,” J. T. Realmuto said. “We feel like he’s done a great job for us. He gets the guys to play hard. We all love playing for him. He’s been our manager all year and nobody’s had anything to say about it. We’ve obviously had a rough last couple of weeks and fell out of contention. For me, Gabe’s our manager. He’s a guy that this clubhouse really respects.”

Kapler is operating as if he will be back.

“I think there’s a laundry list of things I’d want to address and that I’m assuming I will address,” he said.

Both Harper and Realmuto were asked about what the team’s biggest needs were.

Harper was somewhat vague, saying teams can always get better in a variety of areas, but he did say that he’d be willing to speak with the people who run the club about any matters they’d like to discuss.

“Whenever they ask,” he said. “Whatever it is, I’ll be there no matter what. Being through here for a long time … these are decisions that are going to absolutely need to be talked about with myself, I would think. So whoever calls or asks, I’ll be there.”

“I don’t think it’s any secret,” he said. “Probably pitching. We can improve defensively as well. But we definitely need some pitching. We need starters. We need bullpen. You can never have too much pitching so I think that’s where we need to go.”