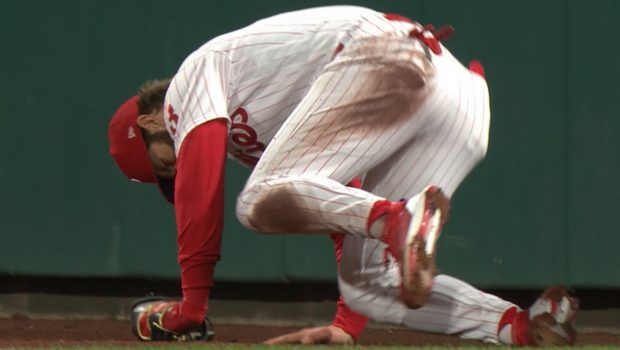 PHILS HARPER IS SORE AND SLUMPING: HOW ABOUT A NIGHT OFF?

Six weeks into the season, and the Phillies $330 million man is mired in a deep slump.

Bryce Harper is hitting only .219, and while his fielding exploits are making up for some of that, perhaps he needs a night off.

And he has a good reason.

He avoided any significant injury when he slid into the right-field wall last night but he admitted after the game that his left knee was “definitely sore.”

With the Phillies trailing the Brewers by five runs in the top of the sixth inning, Harper raced toward the right-field line and made a sliding catch into the wall in foul territory for the first out of the inning. Though his right leg made contact with the wall, it was actually his left knee hitting underneath the padding that provided the scare.

Harper stood up and immediately started limping, as manager Gabe Kapler and assistant athletic trainer Shawn Fcasni raced out to check on their 26-year-old superstar.

Harper not only stayed in the game, but he made a nearly identical sliding catch just three batters later, though he managed to avoid the wall on that one. Though he said he “felt fine” at the time, Harper acknowledged his knee was sore as he stood in front of his locker following the 6-1 loss.

“I’ll see what I feel like tomorrow,” said Harper, when asked if he might need a day off on Wednesday. “I like to play, I like to be out there, be in the lineup for my guys and things like that. Sliding into the wall and making a play like that, jamming my knee up — we’ll see how I feel tomorrow. If I think I need a day, I’ll talk to [Kapler] and see what he says.”

Kapler said he decided to leave the outfielder in the game based on the nature of the play, as well as his discussion with both Harper and Fcasni.

“I probably would have [taken him out] if I thought there was any risk there,” Kapler said. “Always looking to see if you’re putting a player in any further danger, but it was him banging his knee, not twisting it or anything like that. I asked Bryce. He said, ‘I’m totally fine.’ I said, ‘You promise?’ and he said, ‘Yeah, I’m good to go.’ Then he proved it.”

Health would seem to be the only reason that Kapler would consider resting Harper, who went 0-for-2 with two strikeouts and two walks on Tuesday to drop his season average to .219. Harper is 1-for-15 with nine strikeouts over the last four games, while striking out multiple times in each. His 20 multi-strikeout games are the most in the majors.

Though Harper has played all 41 games to this point, Kapler doesn’t see a benefit to resting Harper, given he’s healthy.

Harper echoed that sentiment, saying he relishes the fact that baseball, unlike other sports, provides a chance to play every day, and thus, there are constant opportunities to snap out of his offensive slump.

“I think going out there each day and trying to get out of it — I’m not sure a day off is going to work for me mentally or physically or anything like that,” Harper said. “I just need to keep grinding, keep trying to get through it.”

Whether or not Harper is in tonight’s lineup will depend on how his knee responds, but his plan for whenever he takes his next swings is a simple one.