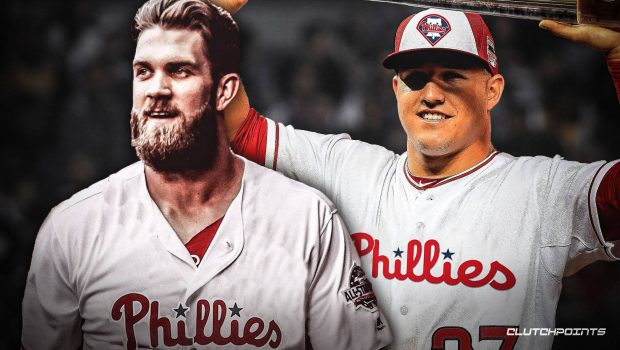 PHILS HARPER IS NO TROUT: BUT HE’S PLENTY DAMN GOOD!

Bryce Harper’s first couple of weeks in a Phillies uniform could scarcely have gone better. Harper introduced himself to his new team — and its infamously passionate fan base — with a .333 average, four home runs and a 1.299 on-base plus slugging in his first 10 games of 2019. Along with such pro-Philly acts as donning Phanatic cleats and ringing the bell at a Sixers game, it was a great first impression for Harper to make after inking what is now the second-richest contract in baseball history.

But just like he did last season, Harper has followed up that red-hot start with an ice-cold slump. Since April 10, Harper is hitting .187 with a .632 OPS, including a .617 OPS in the past two weeks and a .477 mark in the past seven days. And despite all of his attempts to endear himself to teammates and fans, he’s already been criticized by Phillies pitcher Jake Arrieta for getting himself ejected from a game, and he was booed at Citizens Bank Park last week.

Harper is a streaky player, and he’ll break out of this stretch soon enough. More importantly, the Phillies haven’t suffered too much despite Harper’s issues. The team is still .500 since April 10, it still leads the NL East, and our projections call for it to finish with the NL’s fifth-best record. Harper hasn’t remotely been the Phillies’ best player; he hasn’t even been the team’s best offseason acquisition. According to wins above replacement,1 Philly has gotten far more out of new catcher J.T. Realmuto, left fielder Andrew McCutchen and shortstop Jean Segura than it has out of Harper so far:

Bryce Harper Is Not Mike Trout. Good Thing The Phillies Don’t Need Him To Be.