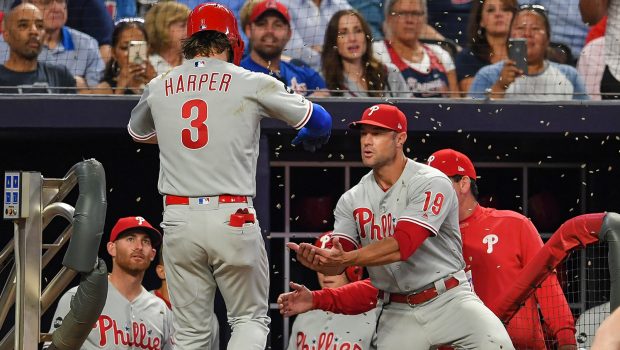 PHILS HARPER IS BACK TONIGHT AGAINST GIANTS AND GABE KAPLER

The Phillies will have Bryce Harper back tonight when they open a three-game road series against the National League West’s top team, the San Francisco Giants and their manager Gabe Kapler, who was broomed by the Phils after two seasons.

Coming off a 6-2 homestand, the Phillies dropped their first two road games against the Los Angeles Dodgers earlier this week before watching Zack Wheeler outpitch Clayton Kershaw in a 2-0 win on Wednesday. The Phillies had Thursday off.

Harper also got Wednesday off after experiencing a small spasm in his back during a Tuesday at-bat.

Phillies manager Joe Girardi said that not only does he expect Harper to be healthy for the entire series in San Francisco, but there will be no restrictions.

“I don’t think it will make Bryce tentative,” Girardi said. “I haven’t seen him really be tentative this year. I put my arm around him sometimes when he slides head-first and I say, ‘Please don’t do that.’ It really hasn’t made him any more tentative.”

Harper went 2-for-6 in the Los Angeles series, with both hits coming in Monday’s series-opening loss.

The Giants are coming off a four-game demolition of visiting Arizona, a series capped by a 10-3 victory on Thursday that sent the Diamondbacks to their record-breaking 23rd consecutive road defeat.

Giants manager Gabe Kapler enjoyed the win not because it embarrassed an NL West rival but because staff ace Kevin Gausman’s eight innings gave all of his key relievers a day off entering the Philadelphia series.

“He’s just done so much for our ‘pen,” Kapler said after the victory. “That’s just so big for us. He’s done that for us all year. Our bullpen has been fresher as a result of his performance.”