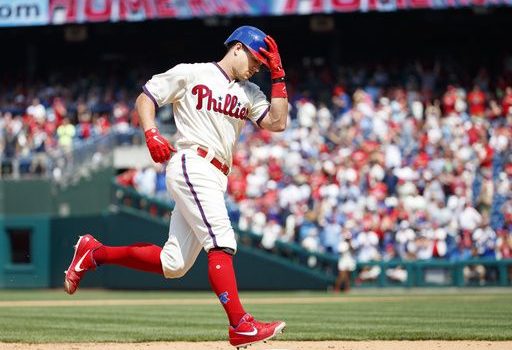 PHILS HARPER AT LEAD-OFF? NOPE, BUT REALMUTO’S A CANDIDATE!

The Phillies don’t have a natural lead-off man because Andrew McCutchen isn’t done rehabbing his ACL in time for opening day.

So, how about slugger Bryce Harper?

“No, no, I wouldn’t do that,” Phils manager Joe Girardi told MLB.com yesterday. “As of right now, I just wouldn’t. I would like for him to hit with somebody on in the first inning.”

He didn’t rule out J.T. Realmuto, who hit leadoff Sunday.

“I know it was a huge void last year, so we’ve got to solve it for however many weeks Cutch is out,” Girardi said.

Girardi loves thinking about lineups. He said lineup construction is the thing he thinks most about in bed before going to sleep.

“Honestly,” he said. “I think about lineups.”

“We started talking about it as a staff with the three-batter minimum rule, how does it maybe change how you construct a lineup?” he said. “When you could bring in a reliever after one at-bat, a lot of times, you’d go left-right-left or right-left, that sort of thing, if you had four lefties. But maybe, you put more space between your lefties so it’s harder for them to deploy their lefties. Most people aren’t going to have three or four lefties. It also depends how many lefties start in our lineup. You want to bring in your lefty to face Bryce, but I’m going to have him surrounded with my best two right-handers around him. So pick your poison.”

In that scenario, the Phillies could create a little more separation in the lineup between Harper and Didi Gregorius.