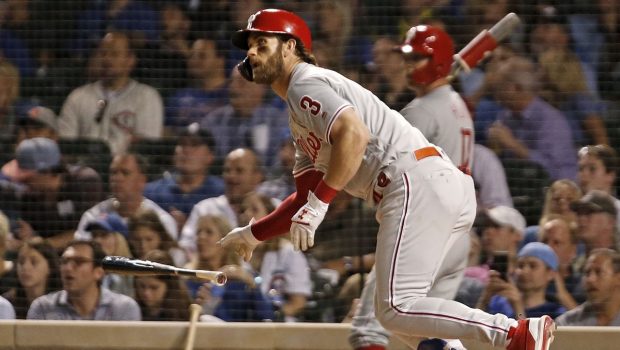 HARPER WAS OFF AND SO WERE PHILS BATS: FALL TO 2ND IN NL EAST!

Kelly (7-6) struck out five before departing when Bryce Harper entered the game as a pinch-hitter. Andrew Chafin retired Harper on two pitches and Greg Holland finished the three-hitter, earning his 10th save in 11 tries.

Kelly has allowed just two runs in his last three starts, working 22 1/3 innings and winning all three. He spent the previous four years in Korea after never pitching above Triple-A in four seasons in Tampa Bay’s system.

”Eflin was just as good (as Kelly) and deserved a better outcome than he got,” Phillies manager Gabe Kapler said.

Nick Williams, starting in place of Harper, got the Phils’ first two hits. He lined a double to right in the third and singled on a soft liner to right in the fifth. J.T. Realmuto had an infield single in the seventh, and that was it for the Phillies.

The Phils entered the game tied with Atlanta for first in the NL East and fell second for the first time since April 25 as the Braves beat the Pirates.