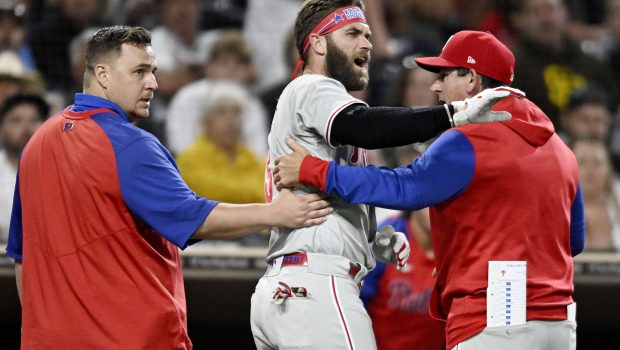 Bryce Harper will have to wait a week to pull the pins in his left thumb.

The Phils slugger and 2021 NL MVP met with his surgeon yesterday, a month to the day his thumb was broken in San Diego by a Blake Snell fastball, but it had not healed enough for the pins to be removed.

There was a chance they could have been, sending Harper to the next stage of his rehab, but instead, he’ll be re-evaluated next Monday, August 1.

“Everything’s on the right path, everything’s going good, it’s just not where we want it to be at this point to be able to pull the pins and be successful with it,” Harper said prior to Monday’s series opener between the Phillies and Braves. “So hopefully another week will get us there, but right now we’re just not there yet.”

Harper again did not want to provide a timeline for his return. Late August or early September would seem to be the most realistic range.

“It’s kinda weird because the rest of my body works so I can do everything, just can’t use my thumb,” he said. “In baseball, of course that’s a big deal, can’t swing a bat, can’t put a glove on your hand.

“I come in every day and work out, get treatment on what I need, elbow, shoulder, keep all that going to be able to throw when I get these pins out of my hand.”

“We’ll be throwing when I get back,” he said. “Once I get the pins out I can kind of — I’m not allowed to sweat really right now just because the pins are sticking out of my hand so I can’t get an infection, we have to be aware of that. But when I do get the pins out, we’ll start progressing with that.

“That’s another program I’d have to go through, a throwing program. Hopefully be in right field by the end of the year, playing out there and being successful throwing a baseball.”