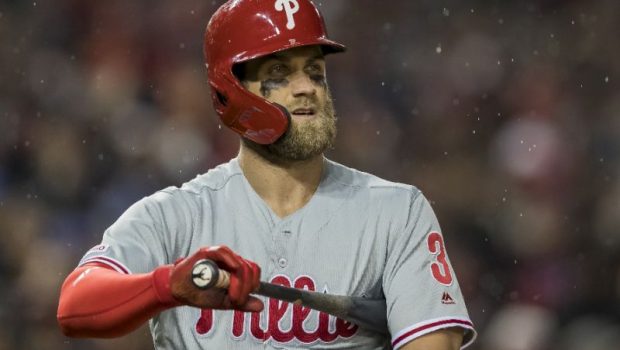 The Phillies fell flatter than a near-miss perfect game on Sunday as they tried to sweep the Milwaukee Brewers and were handed their heads, 9-1, by pitcher Brandon Woodruff.

The Phillies ended their seven-game trip to Chicago and Milwaukee with a 9-1 loss.

Woodruff, who beat the Phils with six innings of one-hit ball less than two weeks ago in Philly, was even better this time. The hard-throwing right-hander absolutely manhandled the Phillies’ hitters, holding them to just one hit over eight walk-free innings. He struck out 10 and Phillies’ hitters struck out 12 times in all.

Andrew Knapp’s solo homer in the sixth inning was the Phillies’ only hit – their only base runner, for that matter.

“Thank goodness for Knappy with him being able to get the homer right there,” Bryce Harper said. “I think a lot of us thought (Woodruff) had the stuff to be perfect today. I thought he went out there and really did a good job. Sometimes it’s going to be like that.”

“He’s really good, man,” Harper said. “I can’t think of who I was talking to on the bench, but he looked like a Matt Harvey when he came up – exploding fastball, curveball, changeup, pitching at the top of the zone. I think he’s really good.”

Woodruff struck out Harper and Odubel Herrera three times each.

All three of Harper’s strikeouts came swinging at high fastballs between 97 and 98 mph.

Now, that’s a big fastball that’s going to bite a lot of hitters. But Harper’s struggles with the fastball this season are notable. He leads the majors with 73 strikeouts. Thirty-nine of those strikeouts have come on fastballs, the most in the majors.

Harper also has swung and missed at 83 fastballs this season, second most in the majors to Arizona’s Christian Walker. Overall, Harper has swung and missed at 16 percent of pitches this season. His career rate entering the season was 11.5 percent. Over the first 53 games of the season, Harper is hitting just .227 with nine homers and 34 RBIs. He does have a healthy .355 on-base percentage, fueled by 37 walks.

After Sunday’s game, Harper was asked specifically about his work on fastballs. He admitted they are giving him difficulty so far this season.

“Yeah, all-around it’s not good right now,” he said. “I’ve got to get better. I’ve got to be better. Turn the page from today and take the day off tomorrow and turn in to St. Louis.”

The Phils host the Cardinals for three games beginning tonight at CBP.

Manager Gabe Kapler did not dispute that Harper is having trouble with fastballs, but he remains full of faith that his No. 3 hitter will explode at some point.

“I have zero concerns on Bryce Harper,” Kapler said. “I am so confident that his numbers are going to be there at the end of the year. We’ve seen in the last couple of weeks flashes of it being where it needs to be. That is more engrained in my mind right now than today’s game, which was really the result of the opposing pitcher being on-point. Nobody was hitting Woodruff today. His fastball has been pretty devastating all year and he attacked with it today.”

This Phils went 4-3 on the seven-game trip. They go into the Memorial Day checkpoint nine games over .500 and in first place in the NL East.

“I think it was a high quality road trip that could have ended better had we had a great game today,” Kapler said. “But again, I don’t know any other way to emphasize this: Brandon Woodruff was phenomenal today.”