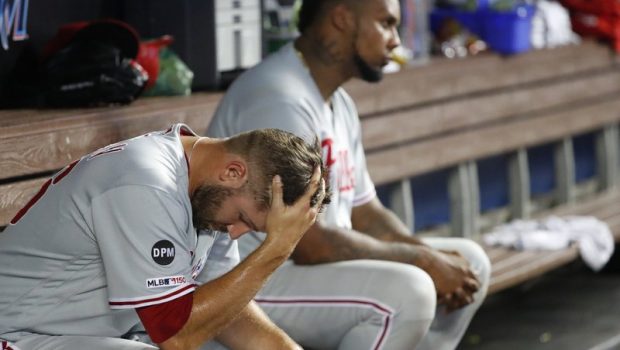 PHILS HANG THEIR HEADS AFTER BLOWING 6-1 LEAD TO LOSE!

Neil Walker homered and drove in three runs as the Miami Marlins rallied from a five-run deficit and beat the Phils for the fifth consecutive time, 9-6.

The Marlins fell behind 6-1 before starting their comeback when Walker snapped an 0-for-15 skid with a two-run homer in the sixth inning. He contributed an RBI single in Miami’s six-run seventh , and JT Riddle delivered a tiebreaking two-run double off Adam Morgan (2-3).

”I didn’t feel there was much left there,” Kapler said.

Eflin said he respected the decision, but it blew up on the Phillies. Morgan and Juan Nicasio each gave up three runs in one-third of an inning.

”When we get to the bullpen, we know that’s their weakness,” said Rojas, whose single started the seventh. ”It was really cool to see everybody putting good at-bats together after Eflin was out of the game.”

The Marlins have the worst record in the National League, but they’re 7-5 against the Phillies.

”It’s easier to play when you have confidence and you have proven to yourself you can beat a team,” Riddle said.

But the Phillies arrived in Miami after a four-game sweep of the Mets. Now they face the prospect Sunday of being swept by the Marlins for the second weekend in a row.