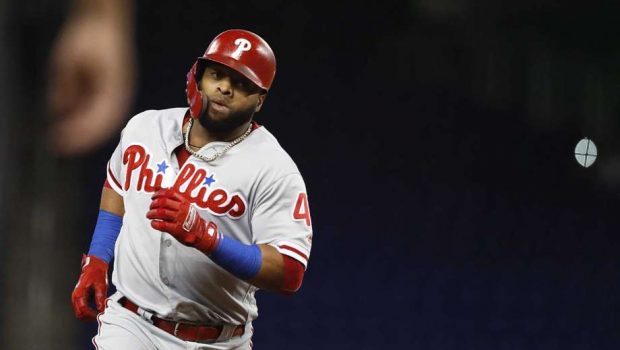 PHILS HAD FISH FROM THE JUMP, NOW TRAIL BRAVES BY ONLY 3!

The Phillies aren’t a great come-from-behind team, and last night they didn’t need to be:

Carlos Santana homered to start a four-run first inning and the Phillies snapped a three-game losing streak by beating Miami 9-4.

Jake Arrieta (10-9) struck out a season-high 11 and earned his first win since July 31. He allowed four runs in 7 1/3 innings and improved to 5-1 in eight career starts against the Marlins.

The Phillies, struggling to stay in playoff contention, are now only three games behind first-place Atlanta in the NL East after the Braves lost to the Red Sox 5-1.

Asdrubal Cabrera drove in three runs with his 23rd homer and a double for the Phillies. Santana drove in a two runs and scored twice, while Cesar Hernandez hit a bases-loaded triple.

The Phils had totaled five runs in their previous four games, and Santana gave them a jump start leading off for only the fifth time this season. After he hit his 21st homer, Hernandez’s three-run triple later in the inning made it 4-0.

By the fifth it was 8-1. Seven Miami pitchers combined to allow nine hits and 10 walks while hitting two batters.

Newly engaged Marlins starter Trevor Richards (3-8) lasted only 1 1/3 innings in his shortest outing yet. The rookie gave up four walks, four hits and six runs, and remained winless since July 14.