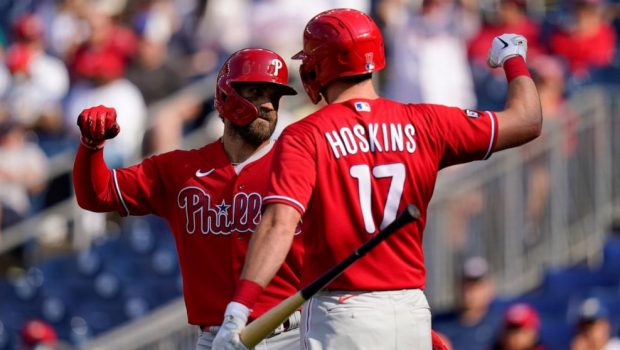 PHILS WILL NEED A HEALTHY RHYS HOSKINS FOR THEIR STRETCH RUN!

The Phils pulled into first place last night with their exciting 5-2 win over the Mets.

But they did it without first baseman Rhys Hoskins, who sat out with a groin injury.

He hit the game-winning two-run double in the ninth inning of a three-hit afternoon Thursday in D.C., but missed the Phillies’ three-game series in Pittsburgh with the groin injury.

He pinch-hit Monday, then started Tuesday, Wednesday and Thursday, going 5 for 14 in the Nationals series with a homer, two doubles and five RBI.

“You could see when he was running, he wasn’t running great when he hit that double,” manager Joe Girardi said Friday afternoon. “We knew that going through this, we kind of go day to day. He’s just sore.”

“It’s not to the point where it was when he hurt it the first time,” Girardi said. “Part of it is me telling him to conserve it, I told him to be smart. But he’s probably going to deal with this for a while and we’ve got to try to keep him good enough to keep him off the IL.”