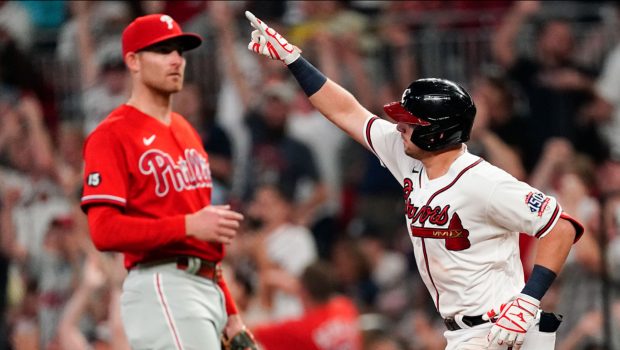 PHILS GO WEAKLY AND MEEKLY INTO ANOTHER EMPTY OFFSEASON

The week started badly for the Phillies, when they were shut out by the Pirates at the Linc last Sunday.

Who knew that offensive emptiness would be repeated in their three-game series in Atlanta.

And they were swept last night and swept out of what can only be euphemistically called a pennant race.

Ian Anderson turned in another dominant pitching performance and the Braves clinched their fourth straight NL East title with a 5-3 victory.

Anderson pitched six scoreless innings of one-hit ball before yielding a two-run homer to Andrew McCutchen in the seventh. A.J. Minter, Luke Jackson and Will Smith worked the final three innings, with Smith earning his 37th save.

The Phils made a late surge, getting within 1 1/2 games of the lead last weekend.

But Atlanta snuffed out the Phillies’ hopes with a stifling run of starting pitching by Charlie Morton, Max Fried and Anderson. In the series, they combined to allow just 10 hits and three earned runs over 20 innings.

When Smith struck out Ronald Torreyes for the final out, it was time for another celebration before a near-sellout crowd of 38,235.