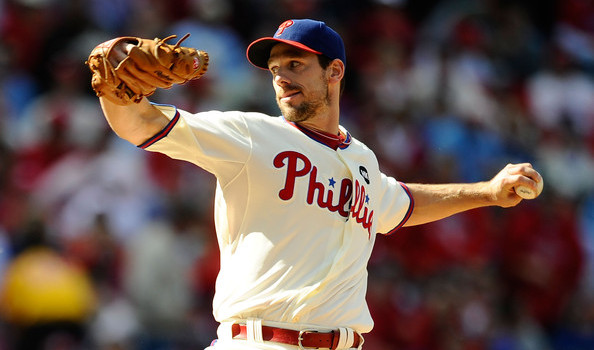 PHILS GET READY FOR A WHOLESALE TRADING SEASON

“Someone had to replace Ruth and Aaron at some point, didn’t they?” asked Phils GM Ruben Amaro Jr., adding exaggeration to the list of his deficiencies

Take heart, Phillies fans, the five-game winning streak may have ended last night as the Nats won in extras, but the Fightins lead major league baseball in one important category:

A prospective sale of players not seen so vast that the team may not be recognizable come August 1. The Phils are poised to become the stars of late July.

If they become sellers this month the Phillies potentially could offer up not one but two pitching aces (including Cliff Lee, photo above, who hasn’t thrown a pitch in anger since May 20), a shutdown bullpen closer, a couple of iconic position players, an entire outfield (including a hot righty power bat) and more.

“We have to be realistic,” Amaro said. “We won five in a row before and went into the tank.”

Amaro several times told Heyman in a phone interview Saturday they are keeping their eyes and ears open. And more importantly, he also noted that they are “keeping our minds open.”

The Phillies GM understandably says they’re “still assessing” their situation, in light of their second five-game win streak against top teams, just in case. He understands they could transition to the full-fledged sellers folks are expecting. Or they could hold on a bit longer.

“I would assume based on the standings we’d be a seller. But that could change in a week,” Amaro said.

Executives who’ve talked to the Phillies suggest, barring a turnaround, the Phillies will listen on almost anyone. One person with Phillies ties believes anyone but Chase Utley could go.

Amaro, seeing the dynastic team lose for a second straight year, sounds like he’s willing to take it a step further, which is the right way to approach it. “I’m open to anything,” he said.

That said, the GM allowed that the two players with 10-and-5 no-trade rights — Utley and Jimmy Rollins– are the two least likely to go, even suggesting they are “unlikely” to go, presumably for that very reason. (If one is less likely than the other, it would seem to be Utley, who’s an All-Star again and who’s never even given the smallest of hints he may be open to accepting a trade out of Philly.)

Amaro seems unafraid to pull a trigger on a big one, maybe even one or both of the ace pitchers — Cole Hamels and Cliff Lee. They both have limited no-trade clauses, which allow them to decline deals to a majority of teams, and that could complicate matter. The guess is that Lee might be less apt to invoke the clause than Hamels, who like Utley and Rollins has always been a Phillie and seems to love it there.

Folks familiar with the situation hinted the Phillies would want multiple big pieces back if they were to trade Hamels, with the acquiring team taking the whole contract, which calls for a $24-million average salary. That would seemingly limit potential buyers, perhaps only the Yankees (who might not even have the pieces to do a deal) and Dodgers.

The loss of either star pitcher would put a major dent in a staff that currently is using, as one scout put it, three “4A type pitchers” to fill out its rotation. But the Phillies seem to understand it could be time for drastic measures and don’t convey a fear of losing a cornerstone piece. “Someone had to replace Ruth and Aaron at some point, didn’t they?” Amaro said.

One thing to keep in mind about the Phillies as folks guess what they may do: They don’t have to deal high-salaried players to cut budget (though realistically, a paring of the payroll could enhance rebuilding efforts).

“I’ve never had a mandate from ownership to sell,” Amaro said. “We are cognizant of the competitive balance tax. It would be dumb not to in light of the poor start to our season.”

Amaro noted that, as always, they are thinking of ways to improve both “short-term and long-term.” But if they can’t turn their latest five-game win streak into something really significant, realistically the long-term view figures to become the prevailing one.

That would be big news for a market that currently has no frontline starters (there’s no word yet David Price is officially available), and few impact infielders or righty power bats. If the Phillies go into full sale mode, they singlehandedly change the situation.

1. Cole Hamels, SP: A legit ace, he doesn’t come cheap, with his $144-million contract that guarantees $106 million through 2018. Plus, the Phils would want significant players back. What’s more, Hamels can block trades to 20 of 29 teams. He’s always seemed like he loves it in Philly, though he’s shown a little frustration being the worst-supported starter this side of Jeff Samardzija (in his Cubs days). He’s 3-5 despite a 2.87 ERA.

2. Cliff Lee, SP.: He can block 21 teams, but he could be more inclined to approve deals anyway. The Yankees have been chasing him forever, and maybe they’d make the most sense since he has a backloaded deal that’ll pay him $49 million through only ’15 (and possibly $64 million thru ’16, if an option vests) and they aren’t on his no-trade list. One more thing: There’s currently a health concern — he hasn’t pitched since May 20 because of an elbow strain) which could limit the take. They hope he can throw Monday, which might leave time for up to three big-league starts to prove he’s healthy.

3. Jonathan Papelbon, RP: He’s having a superb season, but since he’s throwing 92-94 mph and not 98 anymore, there are skeptics. “We’re waiting for the other shoe to drop,” said one skeptical AL scout. He has $19 million to go through next year (plus a vesting option for ’16), complicating things. Still, he’s logical to be dealt considering there are ready-made replacements in youngsters Ken Giles and Jake Diekman.

4. Chase Utley, 2B: Has no-trade capabilities and the desire to retire a Philly. Likely a Phil forever.

5. Jimmy Rollins, SS: Now that he’s the all-time Phillies hits leader, perhaps he’d consider a trade. Still not too likely, thanks also to his $11-million salary (though he has 11 homers and 18 stolen bases, and still plays a mean shortstop).

6. Marlon Byrd, OF: Putting together a second straight monster season with 18 homers already. Mariners and others are in. Limited (four teams) no-trade does include Seattle, though.

7. A. J. Burnett, SP: Has postseason experience, but also a contract with a mutual option for 2015 that allows the pitcher to exercise it for between $7.5 million and $12.75 million.

8. Ryan Howard, 1B: People understand he’d be better off in the AL as a DH. But how does one go about offsetting that $25-million salary?

9. Antonio Bastardo, RP: They’re getting a lot of calls about Bastardo, who can be a dominant lefty out of the pen.

12. Ben Revere, OF: Teams with more production in left field might be able to carry a center fielder without power.

13. Domonic Brown, OF: Doing a bit better lately, but a change of scenery could be beneficial.