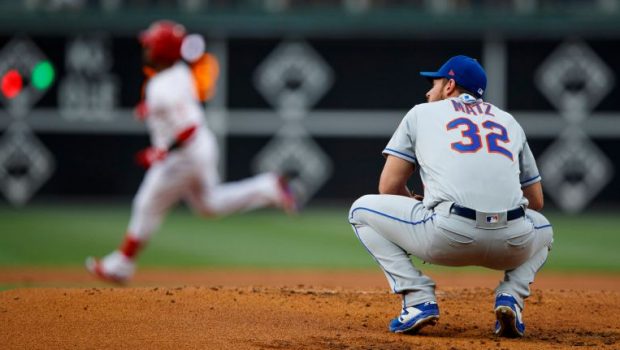 PHILLIES GET OFF THEIR BUTTS AND EXPLODE FOR 13!

A cynic might say that the Phillies explosion last night at Citizens Bank Park was a long time coming.

Jean Segura, Rhys Hoskins, Jay Bruce and Maikel Franco each homered to lead the Phillies past the New York Mets 13-7.

Scott Kingery also had three hits for the Phillies, who snapped a season-long seven-game losing streak. Bryce Harper added a pair of doubles and two RBIs.

The Phillies, who had a season-high 19 hits, had scored 12 runs combined in their previous four games.

Phillies starter Zach Eflin (7-7) tied his career-high by giving up 11 hits to go along with six runs in five innings.

Michael Conforto, Todd Frazier, Wilson Ramos and Dominic Smith each homered for the Mets. Conforto and Ramos had three-hit games, while Frazier, Pete Alonso and Smith added two hits each.

Mets starter Steven Matz (5-6) allowed 10 hits and seven runs in only 4 1/3 innings before being lifted.

The Mets went ahead 2-0 in the first inning following an RBI double by Conforto and an RBI single by Frazier.

Solo homers by Segura and Hoskins in the bottom of the first tied the game at 2, and a single by Roman Quinn drove in a third run later in the inning.

Harper ripped a double to deep center in the second, scoring Segura for a 4-2 lead.

The Mets then closed within 4-3 in the third when Frazier lined a solo homer to left center. Two batters later, Ramos added a solo shot to right to tie the game at 4.

Harper’s second RBI double gave the Phillies a 5-4 lead in the fourth as Kingery scored all the way from first.

Conforto hit a solo homer in the fifth — his 17th career homer against the Phillies — to tie the game at 5. Amed Rosario later hit a sacrifice fly to put the Mets ahead 6-5.

Franco slammed a two-run homer in the fifth as the Phillies regained the lead 7-6. Kingery then added an RBI double for an 8-6 advantage.

In the sixth, Bruce laced a two-run homer, his seventh with the Phillies and his 21st of the season, to widen the lead to 12-6.