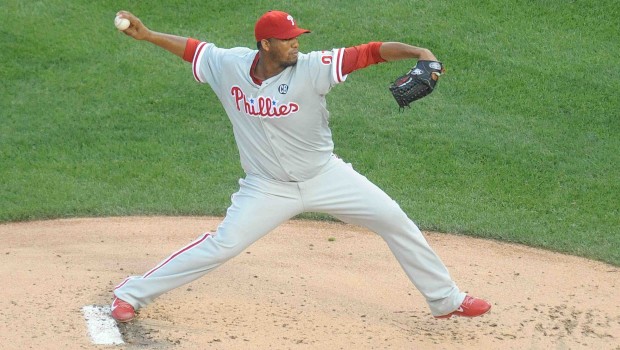 PHILS GET A GEM FROM HERNANDEZ, A SAVE FROM PAPELBON

A day after Jonathan Papelbon wasn’t traded, he showed the Phillies and the Nats why he was signed by the Phillies two seasons ago.

Papelbon was pitching to the Nationals’ Bryce Harper and could see Adam LaRoche, the tying run, on second base. Harper had resisted Papelbon’s fastballs an eyelash off the outside corner. He had flicked foul splitters intended to fool him. He had stayed alive long enough for one more pitch, the ninth of the at-bat.

At the end of a maddening offensive night for the Nationals, Harper’s showdown with Papelbon provided a flicker of hope. It only added frustration to the Nationals’ 2-1 loss to the Phillies. But Papelbon’s 88-mph split-fingered fastball darted under Harper’s swing for a third strike.

One batter later, second baseman Asdrubal Cabrera struck out and the first-place Nationals dropped their second straight game to the last-place Phillies despite Doug Fister’s exquisite seven innings, marred only by Harper’s second-inning misplay and Marlon Byrd’s game-winning, opposite-field homer in the sixth inning. Philly right-hander Roberto Hernandez (photo above) allowed one unearned run in eight innings as a cavalcade of line drives zipped into leather.

The Nationals acquired Cabrera from the Cleveland Indians not to replicate Zimmerman’s production, but to provide a lift with him out. Cabrera ripped three line drives in his first three at-bats, all of them right at defenders, before striking out to end the game. In his first game at second base since 2009, Cabrera made a slick, sliding play and manned the position like a natural.

“My first inning, I felt a little weird,” Cabrera said. “But after that, I felt confident again. I think if you play shortstop, you can play any position in the infield.”

The Nationals have not hit a home run in any of the nine games they’ve played without Zimmerman. Friday night, they found the biggest problem with not pounding the ball over the fence: it might find its way into a glove.

The Nationals smashed line drives at fielders all night — nine of the 24 outs Hernandez recorded resulted from lineouts or flyballs to the warning track. In the eighth inning, Denard Span ripped a line drive at Hernandez’s chest. When he caught it, mostly in self-defense, it made Hernandez both the luckiest pitcher alive and a pitcher lucky to be alive. Anthony Rendon followed with a flyball that pushed left fielder Grady Sizemore’s heels to the fence to make the inning-ending catch.

Once Hernandez left, LaRoche and Ian Desmond sparked a one-out rally in the ninth inning with line-drive singles to left field. The key at-bat fell to Harper, but his search to find his swing remained fruitless. He continued toggling between stances Friday, and even with a line-drive single in his first at-bat in the second inning, Harper is 20 for 86 with five extra-base hits since coming off the disabled list. He exited the Nationals clubhouse Friday night as reporters were walking in.

“The more he sees, the better it is — we hope,” Williams said. “He had a nice at-bat. Unfortunately it didn’t turn out for him, but he saw a lot of pitches, he took balls off the plate, he fouled a few off. So yeah, it was a good at-bat.”

The Nationals may have headed to extra innings if not for Fister’s one mistake. With two outs in the sixth and the game tied at 1, Byrd strode to the plate. Fister had struck him out twice, working with his sinker high in the strike zone. Fister changed his plan and tried to jam Byrd with an inside fastball. But it stayed over the plate, and Byrd smashed it over the right field fence.