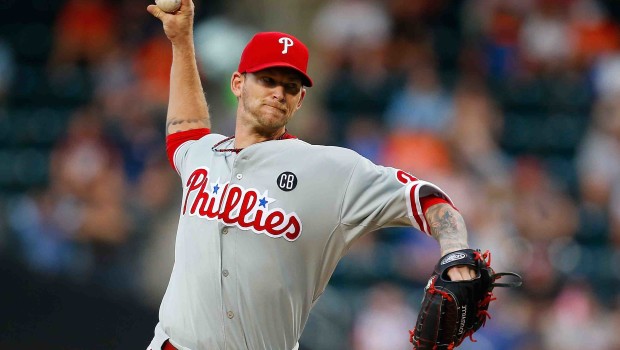 PHILS-METS, ONCE A GREAT RIVALRY, NOW AN AFTERTHOUGHT

One of the disheartening effects of the Phillies’ slide into oblivion is the fact that their rivalry with the New York Mets — which used to inspire fights in the stands and on the field in Philly and in New York — is now a ho-hummer.

The Phillies arrived at Citi Field on Monday with a record worse than all but five teams in the majors. It has been a steady and humbling fall for a team that won five consecutive National League East titles, from 2007 through 2011, and a World Series crown in 2008.

And last night’s 7-1 defeat by the Mets in half-empty Citi Field, with A. J. Burnett on the mound (photo above), is indicative of this season, as the Phils fell to 46-60, 12 1/2 games out of first in the NL East, five games behind the Mets.

“We’ve been a pretty cohesive group, just because we’ve been together for so long,” the ace left-hander Cole Hamels told the New York Times. “But we’re human, you know. No matter how well we get along with each other, there still is a purpose of going out on the field and having to produce and be accountable for the contracts that we have. Sometimes things just don’t work out.”

Hamels, more than any other player, crystallizes the decision facing the Phillies. He could command the most in a trade, because he is still in his prime, at 30, and is pitching so well, with a 2.72 earned run average in 18 starts. He is signed through 2018. If they committed to rebuilding, the Phillies would trade Hamels (5-5) for a haul of young talent that could accelerate their path back to the playoffs. If they decided only to retool, it would be a sign that they believed they could win during the life of Hamels’s deal, and they would need to keep him.

The other option, of course, is that the Phillies do not get what they want in return for Hamels and keep him rather than make a bad deal. They have experience trading stars for low-impact returns (the Cliff Lee trade to Seattle in 2009, the Hunter Pence trade to San Francisco in 2012) and would rather not repeat those mistakes.

Hamels, who faces the Mets tonight, can veto deals with 20 teams. But several contenders — including the Los Angeles Dodgers and the St. Louis Cardinals, who are rich in the kind of young talent teams crave — could acquire him without his permission. Hamels said he was prepared, either way.

“I guess the angle that I have is, I just play to win. If it’s in Philly, that’s the best. If it’s not and they make that decision, I have no hard feelings. I understand. I won’t hold it against them, because if the time came, maybe there might be another opportunity to come back. If you play long enough, you might squeak out a few more years here and there, and you might be fortunate enough to come back.

“I just have to go out there and play, and they have to make those decisions.”

Hamels grew up in San Diego but has immersed himself in the community in Philly, where he lives year-round. He declined a chance at free agency to sign a six-year, $144 million contract extension in July 2012. Unlike other generous Phillies deals — like those for Jonathan Papelbon and especially Ryan Howard — Hamels’s is, so far, in line with his production.

When they signed him, Hamels said, the Phillies promised that they would continue to do all they could to chase division titles. Accordingly, even after going 73-89 last season, they signed the veterans A. J. Burnett and Marlon Byrd in free agency. Now both could be traded, along with Papelbon, though vesting 2016 options for Byrd and Papelbon, and a 2015 player option for Burnett, limit their value.

Hamels was at the top of his game in his last start, hitting 95 miles an hour Thursday in a victory over the Giants, and could make a major impact for a contender. Having won already in Philadelphia, he said, does not make it easier to wait through more losing.

“My mentality is to win every year,” Hamels said. “When you don’t do it, it takes a toll on you. That’s just how I was born and bred into playing the game — you enjoy winning. I know I’m fortunate to be able to go out there and play something that I love, but at the same time it can get very frustrating when it’s not going the direction that you’re hoping.”

He continued: “I don’t know. Winning in Philly was probably the best thing that’s ever happened to myself and my family, and that’s something that we always want to do. It’s not like, ‘Hey, I want to go somewhere else.’ It’s like, ‘It’s fun to win in Philly.’

“That’s been the focal point of what I can do: I can help win here, because it’s fun when the fans are here, when the energy in the city’s here. That’s the reason you play.”

The Phillies have lost about a third of their fans since 2011, when they averaged more than 45,000 per game. This year, their average crowd is 30,322. Many fans, it seems, have rendered their verdict: They do not like this team and do not want to pay to watch it.

The Phillies, however, seem to like it well enough to preserve most of the roster. At least, that is Hamels’s prediction. He does not expect much to change before Thursday’s nonwaiver trading deadline, or in the waiver period ending Aug. 31.

“I really don’t think so, just because in the past they haven’t done anything, so you have to go on past experiences,” Hamels said. “There might be one or two, but I don’t think it’s going to be a big overhaul. I don’t know what they’re thinking, but I think in September it’s probably going to not be that different. Hopefully, we have more wins.”

Hamels smiled and continued: “I know they’re not going for the first overall pick. I don’t think that’s their style. If that was the case, we’d all be gone.”