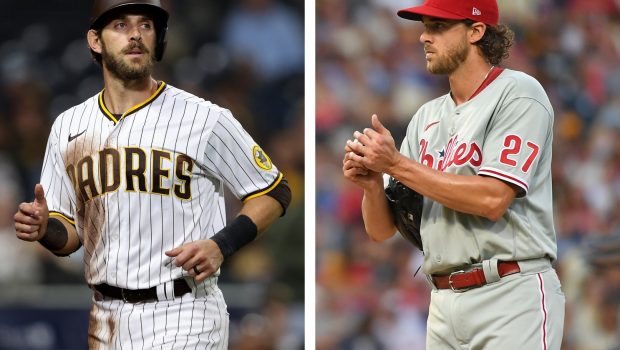 Austin Nola’s RBI single to right off his younger brother Aaron was the decider in the Padres 1-0 win over the Phillies.

“Glad we got the win, but then your brother gets the loss,” said Austin Nola, the Padres’ catcher. “He pitched an unbelievable game. It’s fun to watch him. There’s no doubt about it. He’s done it twice to us. Threw seven innings; threw eight innings last year. What a performance by him.

“It was weird. I got the hit and I was like, ‘Ah, I feel great,’ and then I look at him and he’s locked back in, going after the next hitter. Credit to him. Nothing ever fazes him,” he added.

It’s the first time a player had an RBI against his brother in a 1-0 victory since RBI became an official stat in 1920, according to STATS.

San Diego rookie left-hander MacKenzie Gore and three relievers combined on a five-hitter. Closer Taylor Rogers loaded the bases with two outs in the ninth before getting Kyle Schwarber to fly out to center field.

Austin Nola had been 0 for 4 against his brother in two seasons until delivering an opposite-field single to right with one out in the sixth to bring in Eric Hosmer, who was aboard on a one-out double.

Aaron Nola, 29, kept the Padres off balance through the first five innings, including retiring his 32-year-old brother on a grounder in the second and a punchout in the fourth.

The Nolas first faced each other as professionals on Aug. 21, 2021. They grew up in Baton Rouge and both played at LSU.

Other than getting one-upped by his brother, Aaron Nola (4-5) pitched well. He allowed one run and seven hits in seven innings while striking out 10 and walking two.

“Facing him is exhausting because from the catching standpoint, you have your pitcher and getting your pitcher through it, and then you have to switch over to the fact that now I’m facing my brother in a major league game and he’s not letting up,” Austin Nola said. “So you have to like mentally jump from one to another of, ‘All right, I’ve got to help MacKenzie work through this,’ and then, boom, he’s coming right after you.”

Gore struck out four and walked four. He struggled with his control in the third inning and loaded the bases on two walks and a single before getting Bryce Harper to fly out to left to end the inning.

Nabil Crismatt (4-0) pitched two perfect innings for the win. Luis Garcia struck out the heart of the order in the eighth. Rogers loaded the bases with two outs by allowing consecutive one-out singles and then walking pinch-hitter Yairo Munoz with two outs before retiring Schwarber for his 22nd save.

The Padres had retired 12 straight batters until Alec Bohm singled with one out in the ninth.