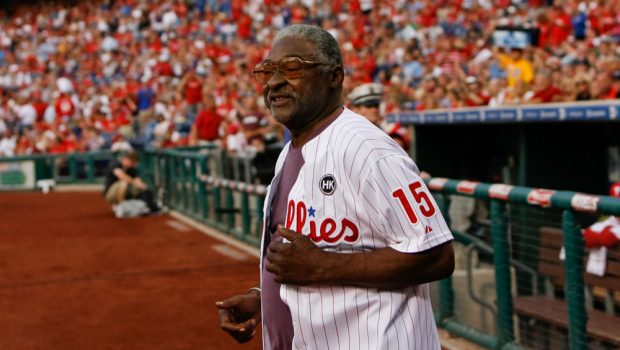 The Phillies have always been a franchise that likes to take its time on big decisions.

Like bringing up Ryan Howard 15 years ago or Spencer Howard and Alex Bohm today.

But those were ostensibly about money.

As in how to save it on the back end of contracts.

And today they have made a decision that is long past due, and it costs them nothing:

They are finally retiring Dick Allen’s No. 15.

The ceremony will take place on September 3, 2020, the 57th anniversary of Allen’s major league debut with the Phillies. The organization will also honor Allen next season when fans will be in attendance and can properly salute his storied career.

“Dick Allen burst onto the 1964 Phillies and immediately established himself as a superstar. His legendary performance on the field gave millions of fans lasting memories, and he helped cement my love for baseball and the Phillies as a young boy,” said Middleton. “The Phillies organization is thrilled to give Dick and his family this honor that recognizes his Hall of Fame-worthy career and his legacy as one of the greatest Phillies of all time.”

One of the premier sluggers of his era, Allen had the fifth-most home runs (319) among all major league players over an 11-year span (1964-74) behind four Hall of Famers: Hank Aaron (391), Harmon Killebrew (336), Willie Stargell (335) and Willie McCovey (327). Also during that time, his combined .940 OPS was second best, narrowly trailing Aaron (.941). Finally, over those 11 years, his cumulative WAR of 58.3 was tied for the sixth-highest among all players, including 37 Hall of Famers to play in that time span. Allen twice led the American League in home runs, including the 1972 season when he was named MVP after hitting .308 with 37 home runs, 113 RBI, 99 walks, a .420 on-base percentage and a 1.023 OPS. His only postseason appearance came in 1976, when he made three starts for the Phillies in the National League Championship Series.

Allen became one of the all-time greats in Phillies history after being signed by the team in 1960 to his first professional contract. He joined the Phillies front office in 1994 as a fan representative and, later, a club ambassador.

Allen joins Hall of Famers Richie Ashburn (1), Jim Bunning (14), Mike Schmidt (20), Steve Carlton (32), Roy Halladay (34) and Robin Roberts (36) as the only Phillies in team history to have their numbers retired. Allen was inducted into the Phillies Wall of Fame in 1994