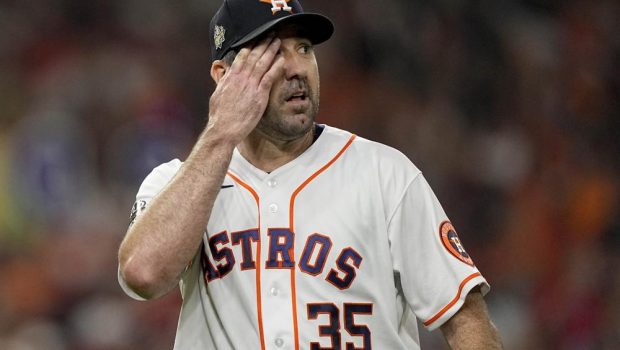 Even with a five-run lead, Justin Verlander couldn’t get his first World Series win.

Perfect through three innings, Verlander’s downfall began with Nick Castellanos’ RBI single, then Alec Bohm and J.T. Realmuto each hit a two-run double as the Phillies rallied for a 6-5, 10-inning win over the Houston Astros.

“Disappointing,” Verlander said. “My team gave me a five-run lead and I wasn’t able to hold it. I feel really confident that 99% of the time that I’m able to hold that lead and unfortunately today I wasn’t. ”

Verlander was pulled after five innings. The 39-year-old right-hander allowed six hits and two walks in a no-decision that left him 0-6 with a 6.07 ERA in eight World Series starts — the highest ERA of any pitcher to throw at least 30 innings in the Fall Classic.

“I need to do better. No excuses,” he said. “Just need to execute pitches better. I felt like I had some guys in good situations and just wasn’t able to quite make the pitches that I wanted to.”

Verlander became the fourth-oldest pitcher to start a Series game after 43-year-old Roger Clemens, 40-year-old David Wells and Early Wynn, a slightly more aged 39. Verlander said he was ready and looked the part, his face filled with stubble from his habit of shaving only right after a start.

Likely headed to his third Cy Young Award after going 18-4 with a big league-best 1.75 ERA in his return from Tommy John surgery this season, Verlander has said he hopes to pitch until age 45.

His first three innings could not have been smoother. A sharp fastball averaging 95 mph, a curve and a slider kept the Phillies off balance the first time through the batting order. Verlander needed 36 pitches to get nine outs, 27 of them strikes.

“I thought we did a great job grinding at-bats out,” Harper said.

Bohm hooked a first-pitch hanging curveball into the left-field corner to cut the gap to 5-3.

“You’ve seen it once. So there’s some familiarity there,” Phillies manager Rob Thomson said of Verlander’s second time through the order. “We got his pitch count up pretty good. I thought his stuff was good. But we did, we had some good at-bats.”

Only after Bryson Stott worked out a 10-pitch walk did Verlander retire Jean Segura on an inning-ending popup, his 31st pitch of the inning.

“He made some mistakes with his breaking ball, because almost every pitch they hit was a breaking ball,” Astros manager Dusty Baker said. “He couldn’t get the breaking ball down. That’s what changed. Sometimes you change your game plan. You can’t keep throwing the same guys the same way all the time. That’s rare for him not to make those pitches.”

Then in the fifth, No. 9 hitter Brandon Marsh doubled leading off to break an 0-for-14 slide, Kyle Schwarber walked and one out later, Realmuto drove another hanging curve off the chain-link fence in left-center to tie the score.