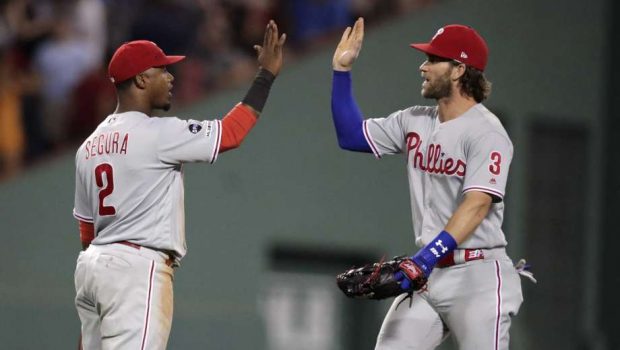 PHILS EXPLODE FOR 3 IN 1ST TO BEAT THE BOSOX, WATCH!

Phillies shortstop Jean Segura made a quick flip to throw out Xander Bogaerts for the first out in the ninth when he attempted go from second to third on a grounder to short. Then, while covering the second base position in a shift, Segura gloved a hard liner and threw to first to double off pinch-runner Chris Owings and end the game.

“Segura was on top of his game in that inning,” manager Gabe Kapler said after beating Boston 3-2 on last night. “Real quick reactions, and certainly good positioning by (infield coach Bobby Dickerson).”

Segura added a two-run double in the first inning and Aaron Nola (12-3) pitched seven innings of four-hit ball to help Philadelphia snap a two-game losing streak. Nola allowed two runs and one walk while striking out seven to win for the sixth time in his last seven decisions.

Kapler said he plans to pitch the right-hander every fifth day, even with days off, through the end of the season: