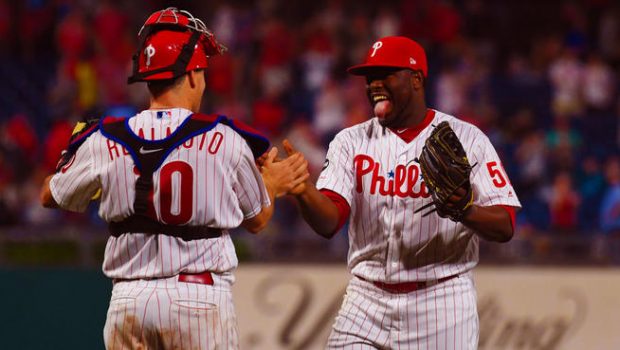 It was the 10th time this season that Harper recorded multiple RBIs in the same game.

Rhys Hoskins also had two hits for the Phillies, who won their seventh one-run game this season.

Phillies starter Nick Pivetta, who made his first start since April 16, tossed five innings and gave up three hits and three runs while striking out six and walking two. Pivetta (3-1) threw 106 pitches, 63 for strikes.

Hector Neris (above) threw a scoreless ninth for his 10th save in 10 chances.

The game was delayed by 50 minutes and the rain came down on and off several times throughout the game.

Paul Goldschmidt hit a solo home run among his two hits while Marcell Ozuna also homered for the Cardinals.

Cardinals starter Adam Wainwright allowed eight hits and four runs in six innings. Wainwright struck out 10 for the 10th time in his career and didn’t walk a batter.

The Cardinals jumped out to a quick 3-0 lead with a pair of homers in the top of the first inning — a solo blast by Goldschmidt and a two-run shot by Ozuna.

Pivetta labored through the first and threw 29 pitches.

Harper doubled home Pivetta and Andrew McCutchen to get within 3-2 in the third. Harper’s double ended an 0-for-10 skid.

Hernandez hit a two-run home run to right in the fourth to put the Phillies ahead 4-3. His sixth homer was estimated to have traveled 405 feet.

In the fifth, Harper doubled again but was thrown out at home following a single by Hoskins. Center fielder Harrison Bader made a perfect throw to Yadier Molina, who tagged out Harper by an inch ahead of home.