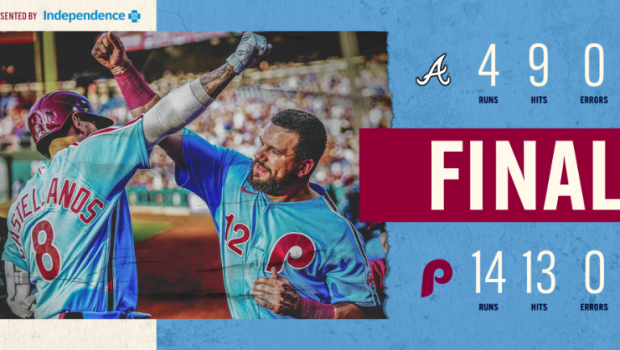 PHILS END JUNE WITH A NIGHT TO REMEMBER!

Kyle Schwarber finished June with another homer and Darick Hall went deep twice as the Phils pummeled the Braves 14-4 to avoid a sweep.

Rhys Hoskins and Nick Castellanos also homered for the Phillies, who reached a season high in runs.

“Everybody is getting hits, runs are scoring and the game of baseball is fun,” Castellanos said. “Nights like tonight are fantastic.”

Schwarber connected on a three-run shot in the third for his 12th homer in June and 23rd of the season. The line drive to deep right also was Schwarber’s 47th in 458 career June at-bats. His average of one homer every 9.74 at-bats in June is tops among all players in MLB history with at least 400 career at-bats, ahead of Babe Ruth’s mark of a homer every 10.63 June at-bats.

Aaron Nola (5-5) allowed four runs and seven hits with eight strikeouts and one walk in seven innings. In his last five starts, the right-hander is 2-0 with a 1.70 ERA and 38 strikeouts and four walks in 37 innings.

The Phillies pulled away with seven runs and six hits in the second off Ian Anderson (6-5).

Castellanos’ three-run homer and Matt Vierling’s two-run double did the most damage in the inning, which also saw RBI singles by Alec Bohm and Bryson Stott.

After Schwarber’s two-out shot off Jesús Cruz, Hoskins made it back-to-back homers with his second drive in two nights. An inning later, Hall led off with a solo shot to right for his first career hit after going hitless in his first six at-bats following a call-up from Triple-A Lehigh Valley on Wednesday.

“I’m just glad I didn’t miss a bag,” Hall said. “I was running, but my feet weren’t feeling the ground.”

Hall’s second career hit also was a home run, as he launched a two-run shot to right in the eighth.