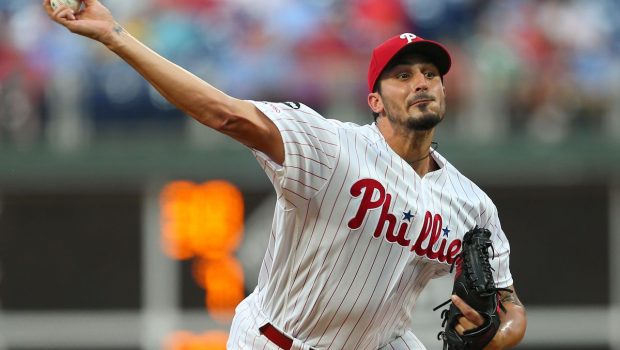 PHILS EFLIN MAKES HIS 2020 STARTER CASE: WHERE’S HE BEEN?

Maikel Franco and Cesar Hernandez also went deep for the Phillies (81-80), who can secure their first winning season since 2011 with a victory in today’s series finale.

Rookie Adam Haseley ripped a two-run single and Deivy Grullon had an RBI double for his first career hit.

Hernandez gave the Phils the early lead by depositing a 2-1 fastball from Caleb Smith (10-11) over the wall in left field to lead off the bottom of the first inning. The homer was Hernandez’s 14th of the season and second in three games.

The Phillies added to the advantage in the second inning as Sean Rodriguez worked a seven-pitch walk before Franco sent a first-pitch slider from Smith over the wall in left field. Franco’s homer was his 17th of the season and second since July 14.

Haseley muscled a single to left field that scored both Rhys Hoskins and Rodriguez in the third inning. Haseley came home on Grullon’s milestone hit to deep center field to stake Philadelphia to a 6-0 lead.

Miami’s Starlin Castro had an RBI single in the sixth inning, but Harper ended any hope of a comeback by depositing a 1-2 fastball from Wei-Yin Chen over the wall in left field.

The homer was Harper’s 35th of the season, the second-most by a Phillies’ player in his first season with the club behind only Hall of Famer Jim Thome (47 in 2003).