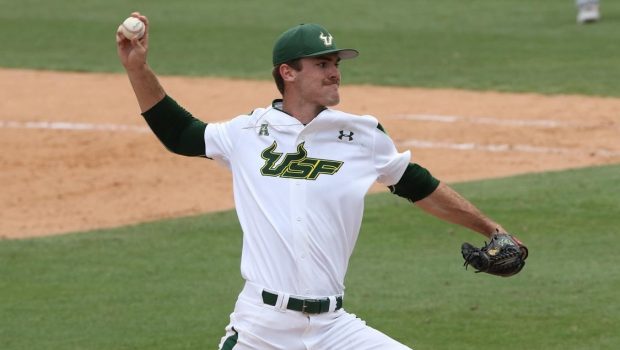 PHILS DRAFTEE CARSON RAGSDALE HAS ALREADY HAD A TOMMY JOHN!

After drafting pitcher Mick Abel in the first round, here’s who the Phils took last night:

MLB Pipeline ranked Martin as the No. 30 prospect in the Draft, but he slid into the third round — either because of questions about his hit tool following an eye-popping freshman season or because he overplayed his signability earlier on Day 2. Regardless, the Phillies are thrilled to land him with their second pick in the Draft.

MLB Pipeline said Martin is Arkansas’ “toolsiest” prospect since Andrew Benintendi went seventh overall in the 2015 Draft. Martin hit 30 home runs in two-plus seasons with the Razorbacks. He can run, too. His times grade 70-80 on the 20-80 scouting scale.

Martin has 25-HR/25-SB potential in the big leagues, but his strikeout rate has increased each year since his freshman season.

Ragsdale is 6-8 and has a fastball in the 91-95 mph range. He pitched out of the bullpen his first two seasons at South Florida, then missed 2019 following Tommy John surgery. He joined the rotation this season, but made only four starts before the COVID-19 pandemic.

MLB Pipeline ranked Ragsdale as the No. 169 prospect in the Draft. The analysis is there is room for more velocity in his future. Ragsdale throws a curveball, which could be a plus pitch, and he also throws a changeup.

The Phillies must believe Radcliff will improve his contact in the future. If he does, he projects as a power-hitting corner outfielder. Radcliff is athletic. He played quarterback at Norcross High School in Georgia and received scholarship offers to Vanderbilt and Boston College, according to the Atlanta Journal-Constitution.