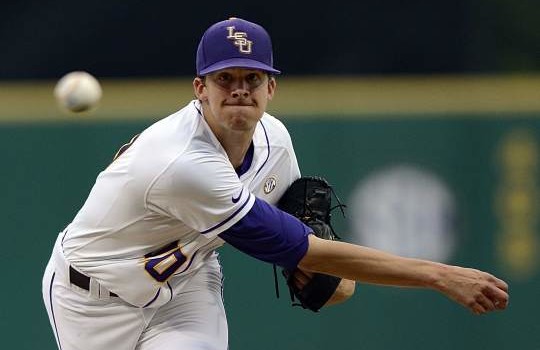 PHILS DRAFT A HURLER FOR THE (NOT TOO DISTANT) FUTURE

In 2011, right-handed pitcher Aaron Nola was selected by the Toronto Blue Jays in the 22nd round of the baseball draft, but he decided to head to LSU, where his older brother, Austin, was an All-America shortstop.

On Thursday, the Phillies used the No. 7 overall pick on Nola, who was the Southeastern Conference pitcher of the year this season.

“I think it’s a good pick for the Phillies,” said MLB Network analyst John Hart, the former general manager of the Rangers and Indians. “It’s a safe pick.”

“He shut people down (in the SEC),” MLB.com contributor Jonathan Mayo said.

Nola went 11-1 with a 1.47 ERA in 16 starts this year. LSU’s season ended Monday when it lost to Houston in an NCAA tournament regional.

Nola became the highest pick for the Phillies since they took right-handed pitcher Gavin Floyd at No. 4 overall out of a Maryland high school in 2001. Floyd, now with the Braves, was in the majors by 2004.

The Phillies can only hope Nola, as a college player, can get to the majors in less time than it took Floyd.

“It’s been my dream to come to school here, and it’s one of the best programs in the nation,” Nola said, according to LSU’s athletic website. “Watching my brother for three years made me want to be here even more.”

The Phillies can certainly use some pitching sooner rather than later. They were swept in a three-game series that ended Thursday in Washington, giving up 19 runs to the Nationals in the three games.