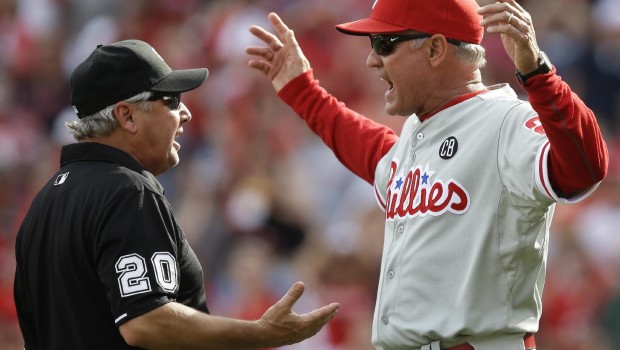 PHILS’ DISPLAY OF POWER COMES UP SHORT AT CINCY

Ryno tossed arguing a plate-blocking non-call at the plate

Cincinnati (28-32) snapped its three-game losing streak and a 17-inning scoreless streak on Saturday.

The victory largely was made possible by the trio of center fielder Billy Hamilton, second baseman Brandon Phillips and catcher Devin Morasco, who ended the sixth and seventh innings by gunning down Phillies runners at the plate.

With Cincinnati leading 6-3 in the sixth, Brown doubled, but Byrd was thrown out at home by Phillips, who relayed a throw from Hamilton to Mesoraco, who took a hit from Byrd but held on.

Crew chief Tom Hallion called for a review to determine whether Mesoraco had blocked the plate in violation of Rule 7.13. After a two-minute, 21-second review, Byrd was ruled out. Phillies manager Ryne Sandberg was ejected for the first time in his career when he left the dugout to discuss the ruling and didn’t immediately retreat as requested by Hallion.

“My argument was (Mesoraco) blocked the plate before he had the ball,” Sandberg said. “Byrd almost twisted his ankle with indecision. It has gone against us three times with different scenarios. Everyone wants to know what the rule is.”

In the seventh, Mesoraco again took a throw from Phillips, this time up the line, and made a swipe tag to retire Ruiz attempting to score the tying run on second baseman Chase Utley’s double.

“It certainly would be nice if we didn’t give up a double in those situations,” Mesoraco quipped.

The game-saving plays at the plate were a proud moment for Mike Stefanski, the Reds’ major league catching coordinator, who works with the club’s catchers in spring training on that very thing.

“Mike called me from the bullpen after the first one,” Mesoraco said. “He was all fired up.”

Byrd’s two-run homer, his ninth home run of the season, put the Phillies ahead 2-1 in the second inning. The lead was short-lived when Frazier tied the score 2-2 with a 416-foot solo blast to center, his 13th homer of the season.

Shortstop Zack Cozart doubled home Frazier, who had singled and then stole second, putting the Reds ahead 3-2 in the fourth. Cozart scored the fourth run on Hamilton’s sacrifice fly.

“I threw a lot of pitches,” he said. “It is a little frustrating not to pitch deeper in the game. I tried to keep the ball down, but there were too many 2-0, 3-1 counts.”