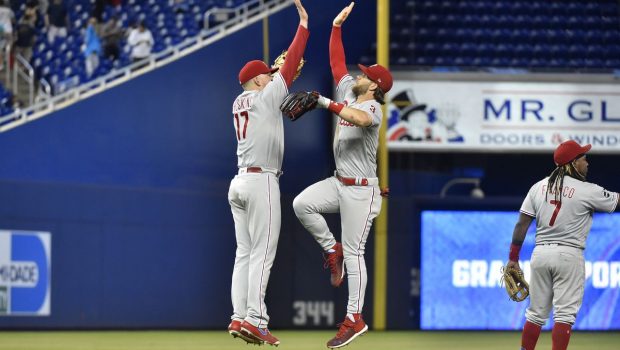 “That’s a big win tonight for us, especially over here against these guys,” Aaron Nola said. “They’ve been playing really good this past month to month and a half. Winning the first game of a series is always big.”

And that was an understatement by the Phillies’ ace.

Nola (7-2) allowed four hits, struck out eight and walked three in his second consecutive scoreless outing. He threw a career-high 117 pitches before Hector Neris finished for his 17th save in 19 chances, striking out the side.

The second-place Phillies, winners of six of eight, trimmed the Braves’ NL East lead to 4 1/2 games in front of the seventh sellout at SunTrust Park this season. Atlanta, shut out for just the second time this season, dropped two in a row for the first time since June 5-6, a span of 24 games.

It marked the sixth time this year that the Braves, whose 56 homers in June set a franchise high for a calendar month, were held to four or fewer hits.

“(Nola) didn’t throw many heaters and when he did throw one it was perfectly placed in a spot where he was setting up his off-speed,” Braves All-Star first baseman Freddie Freeman said. “Sometimes good pitchers shut down good offenses.”

The Phils went ahead to stay in the fourth. With two out and runners on first and second, Bruce doubled to right to give him 22 RBI in 23 games with the Phillies.

Keuchel (1-2) allowed five hits in seven innings in his third start with the Braves.

“One pitch got me tonight, but I was able to get through seven,” Keuchel said. “Seven’s really the benchmark for me. I don’t really feel whole unless it’s seven-plus, so that’s what I strive for every time out.”

But it wasn’t good enough against Nola, who has been dominant of late.