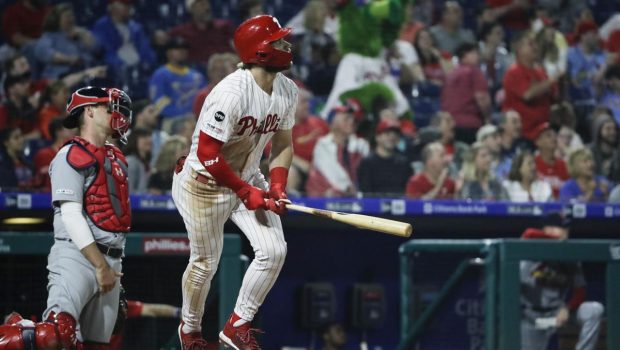 Two weeks ago Phillies fans had their hair on fire about $330 million man Bryce Harper, who was mired in a slump and couldn’t seem to get around on fastballs.

He banged his 10th homer and collected his 40th RBI, raising his batting average to .243 as the Phils pummeled the Cards 11-4.

Harper lost his helmet somewhere on the basepath as he bulldozed his way from a lazy hit into a hard-charging, head-first, hair-flowing double.

Harper’s homers continue to wow the crowd. Harper’s hustle may be more fun to watch.

“I think that type of effort-level is uncommon in a superstar of Bryce’s caliber,” Phillies manager Gabe Kapler said. “It’s not often you see that combination of talent, grit, determination and all-out, 100% hustle.”

Harper hit his 10th homer , his 200th career double and drove in four before fouling a ball off his foot and exiting in the fifth inning, and the Philadelphia Phillies beat the St. Louis Cardinals 11-4 following a rain delay Wednesday night.

The white-hot Harper had his second straight multihit, multi-RBI game against the Cardinals. He drove a two-run homer to left-center in the third and followed an inning later with a two-run hustle a double. Harper hit a chopper that rolled into right — and he kept motoring. He slid head-first to beat the tag and slapped his hands in celebration of the milestone hit.

“It was kind of a weak-kind of hit,” Harper said. “I was going to try and get out of the box as quick as possible.”

He had three hits when he left the game in the fifth inning after he fouled a ball off his right foot and the Phillies ahead by 10 runs. Harper said it was a precautionary move with the Phillies leading big and a day game ahead on Thursday.

Aaron Nola (6-0) struck out eight over seven innings, a needed lift to save a bullpen depleted by injuries. Scott Kingery and Maikel Franco hit back-to-back homers in the fifth, and Andrew McCutchen hit a two-run shot two batters later to blow the game open.

The Phillies played Genesis’ “I Can’t Dance” when the Cardinals took batting practice, and Genesis Cabrera quickly proved he was in too deep in his major league debut. The biggest smash hit? Harper crushed a no-doubt shot in the third that had the fans that waited out a 1-hour, 39-minute rain delay roaring as he rounded the bases.

Harper hit his 200th career double — he’s on pace for 50-plus this season — in the fourth inning, and the rout was underway.

“Every night we go out there, we do something special as a team,” Harper said.