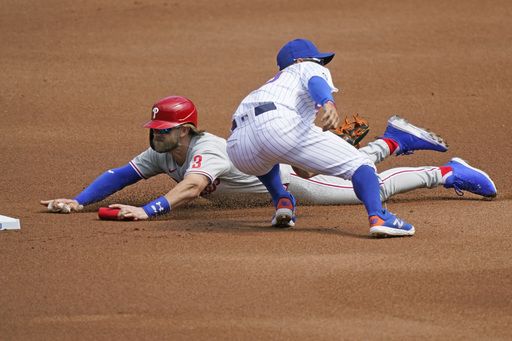 PHILS CRASH TO EARTH BY GIVING UP 2 TOUCHDOWNS!

You’ll have to excuse Phillies fans if they have sore necks.

After getting used to a juggernaut that won 10 of 11 games, they have crashed back to earth in New York.

And yesterday ace Aaron Nola never had a chance.

The Mets Jacob DeGrom struck out 12 over seven innings, Nola was let down by lackluster defense and New York poured it on with a season-best 17 hits in a 14-1 victory over the Phillies.

Nola (4-3) was charged with three earned runs and six total over 5 1/3 innings. He struck out 10, walked one and allowed eight hits.

”Maybe the only runs he should’ve given up were the two solo home runs,” manager Joe Girardi said.

Andrew Knapp hit his first homer of the season off deGrom in the second. The Phillies backup catcher is hitting .462 this season in 14 games.

Phillies left fielder Andrew McCutchen added another misplay in the eighth, taking a poor route on Luis Guillorme’s flyball that went for a two-run, ground-rule double.

”We did not play well today was the bottom line,” Girardi said. ”And we have to play well tomorrow and find a way to win.”

The Phils have dropped two straight after winning 10 of 11 and is just 1 1/2 games ahead of the Mets for second place in the NL East.

Pete Alonso homered twice, Jeff McNeil hit his first shot of the season, and Brandon Nimmo and Wilson Ramos also went deep for the Mets, who have won four of five. Dominic Smith had a career-high four hits, matched a franchise record with three doubles and drove in three.

DeGrom (3-1) allowed three hits and two walks while lowering his ERA to 1.69. With three weeks left in this pandemic-shortened regular season, the two-time reigning NL Cy Young Award winner is a prime candidate for a three-peat in a field that also features the Cubs’ Yu Darvish and Braves’ Max Fried.

”I’ve said that almost every year coming in, that’s a personal goal of mine,” deGrom said. ”Winning two in a row, honestly, doesn’t even really feel like it’s sunk in yet. … I prepared this offseason and this summer with that goal in mind.”

McNeil and Alonso connected off Nola, but the rest of New York’s damage against the Phillies ace was aided by defensive miscues.

”I know this team has the capability of going on a tear,” Alonso said.

Alonso hit his ninth homer of the season off the facing of the second deck against Nola in the second inning and added a two-run shot off Blake Parker in the eighth. The slumping slugger also doubled after entering the game hitting .210. He has four homers in his past four games.

Nimmo and Conforto had three hits each. Ramos struck out four times before hitting a solo shot off Parker in the eighth.