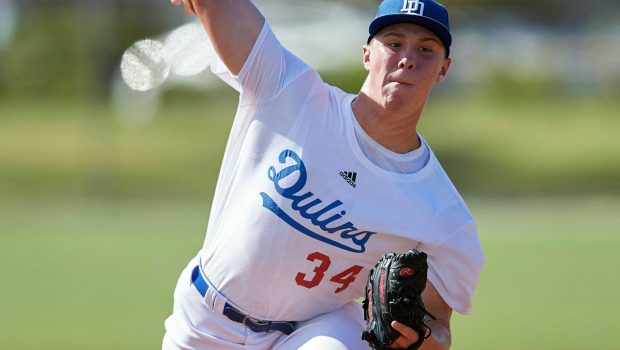 The Major League Baseball draft takes place tonight, and the Phils have the 15th overall pick.

And they could stay local by selecting:

He re-classified from the 2021 draft to this draft in January in hopes to advance his professional timetable. Had he stayed in the 2021 class, Bitsko would have been a top 5 pick in next year’s draft.

Had he been able to pitch this spring the Phillies wouldn’t have the chance to get him at 15, but nevertheless, COVID-19 came in and shut down high school sports so the last time scouts saw him pitch in a live game was the Summer of ‘19.

Bitsko, as recently as last week, reportedly had his fastball up to 98.5 MPH with a spin efficiency of 99%. I don’t want to bore you with spin efficiency but that’s a fastball that is directly comparable to Justin Verlander.

Most people are concerned with injuries when it comes to high school arms, but Bitsko stands in at 6-4 and 220 lbs. He’s not your normal 17 year old, from a physicality standpoint, and has the look of a future ace.

Bitsko would be a steal for the Phillies at 15. His fastball explodes like Max Scherzer’s, he has a feel for a change-up and a curve that is close to a plus pitch and if he had been able to get on a mound this year in competitive games, he likely would have only helped his draft stock.