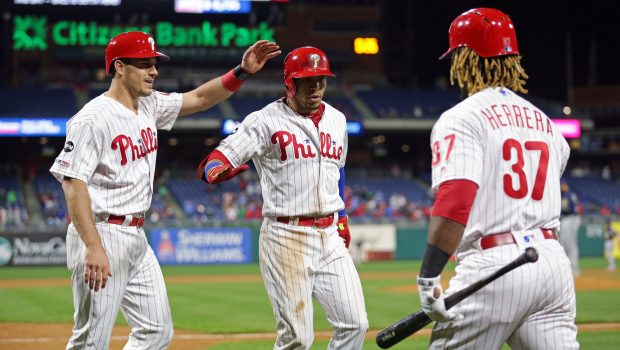 J.T. Realmuto doubled in the go-ahead run, Cesar Hernandez hit a two-run homer and the Phillies beat the Milwaukee Brewers 7-4.

Bryce Harper struck out three times and was hitless in four at-bats but made a diving catch on Moustakas’ liner to right field with two outs, the bases loaded and scored tied in the seventh.

“I’m just trying to play the best defense I can and not let my at-bats factor in,” said Harper, who is batting only .222 after signing a $330 million contract. “You have to play both sides of the ball, stay focused on both sides. My pitchers need me.”

The NL East-leading Phillies then rallied in the bottom half. Jean Segura struck out swinging but reached on a wild pitch by Matt Albers (2-2).

Alex Claudio entered and retired Harper on a fly to center. Junior Guerra replaced him and struck out Rhys Hoskins. But Realmuto ripped a double to left-center to score Segura for a 5-4 lead. After Hernandez walked, Odubel Herrera extended the lead to 7-4 with a two-run double.

Neither starter was effective on a cold night following a 52-minute rain delay at the start.

Phillies ace Aaron Nola lasted only three innings, giving up three runs and five hits. He had given up just three runs combined in his previous three starts.

“I threw a lot of pitches, got behind guys, but the bullpen came in and did a nice job,” Nola said.

Adam Morgan (2-1) got four outs for the win and Pat Neshek finished for his second save.

Moustakas blasted a solo homer into the second deck in right field to give the Brewers a 3-2 lead in the third.

Cain’s RBI double off Austin Davis increased the lead to 4-2 in the fourth. But Davis then pitched out of bases-loaded jam with no outs. Yasmani Grandalgrounded into a third-to-home double play and Eric Thames struck out looking.

Christian Yelich’s double and Grandal’s triple each knocked in runs in the first.

“We had a ton of opportunities but there wasn’t a hit that could break the game open,” Brewers manager Craig Counsell said.

Nola helped himself at the plate in the second. With runners on second and third and one out, he worked a full count and then hit a grounder to shortstop. Thames dropped the throw to first for an error, allowing both runners to score and tie the game at 2.