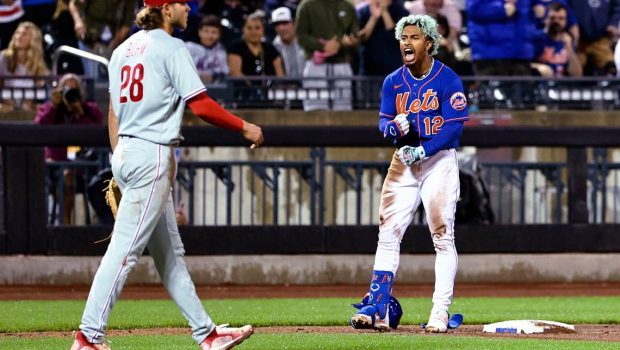 PHILS CAN’T HIT, FIELD OR PITCH — NO MATCH FOR METS!

Lindor walked and Pete Alonso singled, then McNeil roped his homer into the second deck in right field for a 4-2 lead.

Taijuan Walker (3-0) limited the Phillies to two runs in five innings, Luis Guillorme matched a career high with three hits and the NL East leaders improved to 31-17. They’ll try for a three-game sweep tonight in their final game against Philadelphia until Aug. 12.

Bryce Harper, Nick Castellanos and J.T. Realmuto had two hits each, but the Phillies stumbled with yet another defensive lowlight in the outfield and went 1 for 9 with runners in scoring position.

Lindor’s triple was a long fly ball that skipped off the fence in left-center between Phillies outfielders Kyle Schwarber and Odubel Herrera. The pair collided on the warning track and bounced off the wall together, the latest misplay by Philadelphia’s maligned defenders.

“I think they both probably had an opportunity,” manager Joe Girardi said. “But I have to look at it closer.”

Eflin covered six innings but was charged with seven runs. He struck out four after punching out 12 Los Angeles Dodgers in his previous outing.