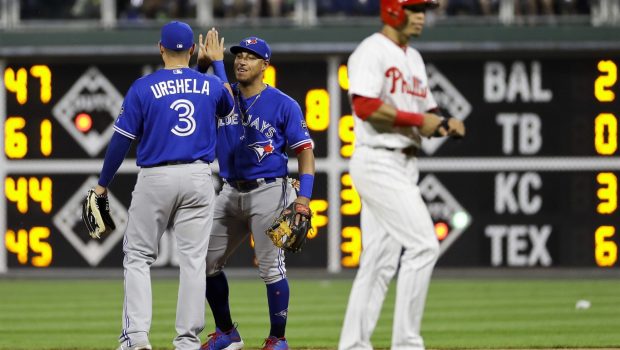 The Phillies blew a chance to creep into first place last night, and their old 1993 World Series nemesis is to blame.

Justin Smoak homered and Sam Gaviglio struck out six over six innings to lead the visiting Toronto Blue Jays to a 6-5 victory over the Phillies.

The Atlanta Braves lost at Boston and they remain a half-game ahead of the Phils atop the National League East.

“We didn’t quit,” Phillies manager Gabe Kapler said. “We fought. We were in the game until the last out.”

After getting Scott Kingery to fly out leading off the inning, reliever Ryan Tepera gave up a single to Jorge Alfaro and a double by Pedro Florimon to put runners on second and third.

Alfaro scored on a wild pitch that also moved Florimon to third. Tepera walked the next two to load the bases with one out before striking out Rhys Hoskins looking and getting Odubel Herrera to ground out.

The strikeout of Hoskins was a perfect pitch that just touched the black on the outside corner – at least according to plate umpire Joe West.

Hoskins didn’t think it was a strike, but said he should have swung.

“I thought it was off,” Hoskins said. “Too close to take in that situation. It’s unacceptable. You’ve got to put the ball in play and give yourself a chance.”