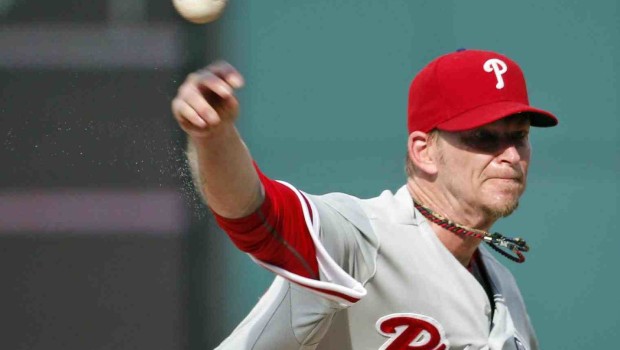 PHILS’ BURNETT HAS THE WINNING FORMULA AGAINST NATS

If only A.J. Burnett could face the Nationals every game.

Burnett allowed one run in seven innings as the Phillies posted a 3-1 win on Saturday for their fifth straight victory over Washington.

Ryan Howard’s third-inning single scored two runs, including Burnett, and Domonic Brown hit a home run in the sixth. Including Friday night’s wild 9-8 comeback victory in 11 innings, the Phillies have won nine of their last 12.

The victory ensures that last-place Philly wins the season series against the National League East-leading Nats. The Phillies are 10-8 with only Sunday’s finale remaining.

Burnett (8-15) limited the Nationals to six hits with two walks and four strikeouts. He went 1-7 with a 5.85 ERA in his previous eight starts.

“I think that’s the best movement he’s had on the ball this year,” Phillies manager Ryne Sandberg said. “Maybe the best curveball he’s had. It was real tight. It was in there for strikes. … One of his better outings.”

Since June 21, Burnett has three victories — all vs. Washington. The right-hander has struggled at times on the road in this matchup, but half of his win total this season has come against the Nationals.

After allowing five runs in 1 2/3 innings at Nationals Park on Aug. 2, Burnett had a simple goal for this start, the 400th of his career.

Burnett did until the eighth, when Ken Giles entered the game. Closer Jonathan Papelbon took over in the ninth and recorded his 35th save. The Phillies’ winning streak against the Nationals is their longest since taking six in a row in 2011.

“It’s been a tough year for us collectively,” said Howard, who has four RBIs in the two wins in this series. “[We’re] trying to come together to finish strong, try to build [momentum] going into next year possibly.”