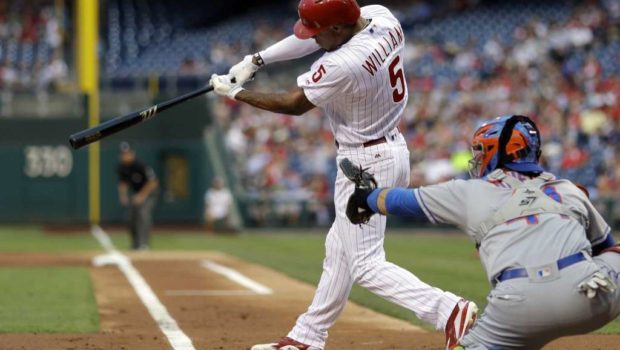 Amed Rosario hit a tie-breaking, solo shot leading off the ninth inning and the New York Mets beat the Phillies 7-6.

After Cesar Hernandez hit a tying, solo homer in the eighth off Jerry Blevins, Rosario connected off Phillies closer Hector Neris (4-5) to cap a three-hit night. The rookie shortstop entered the game batting .161 (5 for 31).

The Phillies jumped ahead 3-0 in the first inning. Nick Williams (above) and Tommy Joseph had RBI singles.

Conforto led off the second with an opposite-field drive to left-center for his 25th homer.

Cespedes gave the Mets a 4-3 lead in the third when he blasted a 429-foot drive to left for his 13th homer. He has nine homers and 23 RBI in 17 games at hitter-friendly Citizens Bank Park.

Joseph answered with an RBI double in the bottom half to tie it at 4.

The Mets are 5-0 against the Phillies in Citizens Bank Park and have 17 homers in those games while the Phillies have just four.