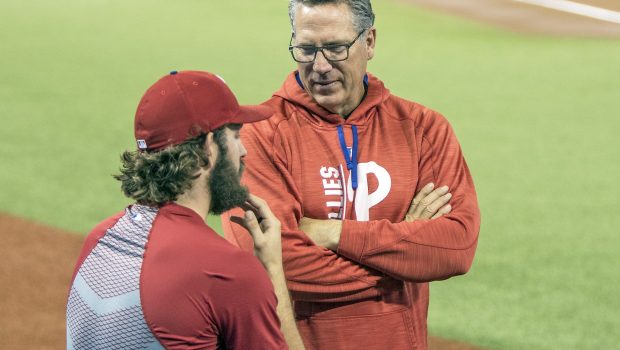 The Phillies are looking for a new bullpen coach.

The big question is, however, when are they going to get a new bullpen?

MLB.com’s Todd Zolecki is reporting that bullpen coach Jim Gott did not have his contract renewed for 2021.

The news follows pitching coach Bryan Price’s recent retirement from full-time coaching. The new pitching coach is likely to have a say in the new bullpen coach.

Gott, 61, just finished his third season with the Phillies — having joined former manager Gabe Kapler’s staff after the 2017 season.

The Phillies last week informed six scouts and one front-office advisor that they will not return in 2021. The group includes former manager Pete Mackanin, who served as a special assistant to the general manager; special assignment scout Dave Hollins, who returned to the organization in ‘09 after playing seven seasons with the Phillies, including the 1993 National League pennant-winning team; special assignment scout Howie Freiling, who had been with the team since ‘08; pro scouts Jesse Levis and Jeff Harris and amateur scouts Mike Garcia and Chris Knabenshue.

There are expected to be further cuts to the Phillies’ front office and player development staff in the coming weeks.