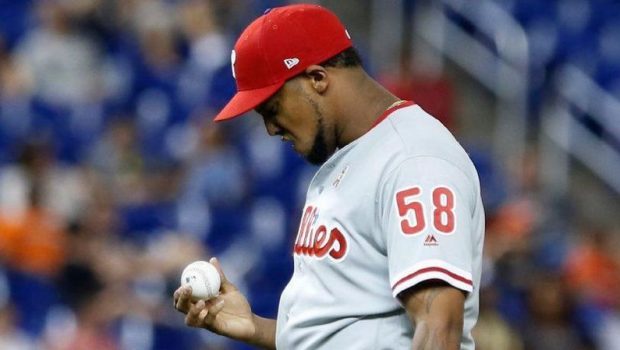 Baez didn’t start for a second straight game because of a jammed right heel, but the 2018 NL MVP runner-up came through immediately off the bench with the game on the line.

“I’m impressed, but not surprised,” said Kris Bryant, who had three hits and used his speed to slide home with two runs. “He’s been doing stuff like that the last couple of years. Thankfully, he was up there in that situation to win the game like that.”

Bryant scored when Albert Almora Jr. hit a chopper toward first, and Nicasio’s underhand toss to catcher J.T. Realmuto was late, a call upheld by a video review. Baez, lined Nicasio’s first pitch to right over a drawn-in infield.

Nicasio earned his first save by getting the final two outs in the Phillies’ 5-4 win in 10 innings on Monday night. Manager Gabe Kapler was forced to go with Nicasio again after Hector Neris tossed an inning on Monday and Seranthony Dominguez pitched two.

“The way he’s been throwing the ball, we felt confident he could get the job done,” Phillies manager Gabe Kapler said.

Phillies slugger Bryce Harper went 0 for 4, dropping his average to .224, and failed to reach base at Wrigley Field for the first time in 19 games at the iconic ballpark. Jean Segura doubled in the first to extend his hitting streak to 12 games.

Running on the pitch from second base, Bryant raced home to score in the first inning when Contreras grounded to shortstop. Bryant slid home ahead of first baseman Rhys Hoskins’ throw.

Andrew McCutchen hit a two-run single in the seventh off Brandon Kintzler to put the Phillies ahead.